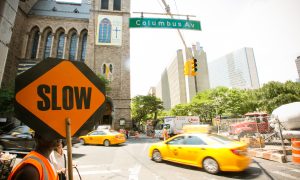 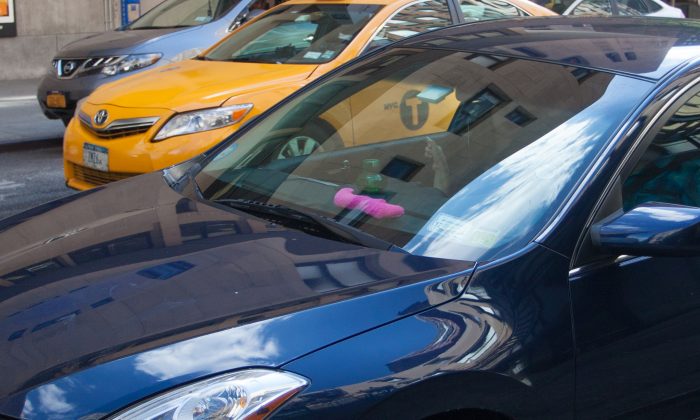 A Lyft car drives down a street with a pink mustache on its dashboard in Manhattan on Aug. 18, 2014. (Benjamin Chasteen/Epoch Times)
New York

NEW YORK—The Taxi and Limousine Commission (TLC) wants to amend rules so it has clear accountability of which bases are dispatching drivers, but Uber, Lyft, and drivers are strongly protesting the changes.

The amendments seem simple; they are mainly changes that would allow the TLC to enforce existing rules. For example, for-hire drivers can currently drive for multiple bases if the bases are in agreement, and the amendment requires the bases to put it in writing.

The accountability will aid traffic collision investigations if a for-hire driver is involved in a serious crash.

In light of the city’s Vision Zero initiative to reduce traffic fatalities to zero, the TLC has started this year to send its own investigators to crashes involving TLC-licensees. On Oct. 16, the TLC board also voted to implement stricter penalties for drivers who cause a serious injury or fatality.

Bases are required to keep dispatch logs, and the proposed change would require the bases to submit them to the TLC regularly, and electronically.

TLC Commissioner Meera Joshi said having data of where drivers are being dispatched to and from automatically and electronically would aid in these investigations as well.

But the rules have garnered strong opposition with arguments coming from several different directions.

Lyft argues this will create a monopoly. Uber said it will leak trade secrets. Drivers said it will cost them thousands of dollars.

It’s no secret that many for-hire drivers affiliated with one base also drive for Uber or Lyft, and the underlying concern is that these base owners will not agree to let their drivers drive for other companies.

Several drivers testified at the TLC hearing Oct. 16, citing long work hours and extended periods of idling as issues involved with driving for only one base.

If they can fill up the idle hours of the day with Uber or Lyft requests, some drivers said, they make more money while sticking to a reasonable work schedule.

About one-third of Uber drivers are affiliated with another base.

Lyft, on the other hand only has about 10 drivers and stands to lose the most. The company affiliates with hundreds of other drivers, and many are Uber drivers.

“Uber has already made quite clear to us that we need not ask them for an agreement—it’s not going to happen,” said David Estrada, government relations manager at Lyft. “So we have to change our business entirely.”

From Lyft’s perspective, it is inevitable that one big base—and they mean Uber—will take over the industry. Local bases have been in favor of this rule, but ironically it will hurt them most, Estrada argued.

“Here’s what I think is going to happen: we are going to be forced to lure drivers from local bases because we have no drivers … so they come to us for the bonus payments, and then a larger player lures the drivers away from us,” Estrada said.

Although Uber is against the new rules as well, Estrada said its rival company would be incentivized to create a monopoly, as the rule ultimately favors the most capitalized company.

Representatives from the livery and black car industry refuted the idea that base owners would cut off Uber and Lyft’s supply of drivers.

Ira Goldstein executive director of the Black Car Fund said the majority of its 200-plus members—but not all—have expressed willingness to partner with other bases like Uber and Lyft.

Cira Angeles, spokeswoman for the Livery Base Owners Association, said it was just good business sense. Base owners know if they set hard rules to prevent drivers from taking Uber or Lyft jobs they may lose them.

“This isn’t about friendship,” Angeles said. “This is a business relationship.”

Uber’s concerns were significantly different from the other protesters’ monetary concerns. The company is more concerned with inconvenience.

If the rules are enforced it would not only mean each base has to submit electronic dispatch data, but it would end cross-class dispatches.

Livery cabs and black cars fall under separate classes: liveries can take cash for any ride, but 90 percent of a black car base’s business cannot be cash (traditionally they have served corporate accounts).

Uber, a black car company, would not be able to use livery drivers under these rules—unless they opened a livery base.

“I would have to move my office location because it’s not commercial zone use six. I don’t even know what that is,” said Josh Mohrer, Uber’s general manager for New York.

Livery base owners support the rules and said this would ensure that players like Uber and Lyft are held accountable. Tarek Mallah, general manager of Livery Round Table, said as the owner of Dial 7 Car and Limousine Services, he has been following those procedures for 37 years.

Mallah’s company has 950 drivers and three bases, so it has made the choice to invest millions to buy the right building. But over 600 smaller livery bases do rent the space they need for $5,000 monthly, he said, and it is entirely possible to do.

Mohrer said the company also currently partners with bases so that 2,000 wheelchair-accessible street hail liveries (green cabs) are available to riders. Under the rules, they would not be able to provide that service (UberWAV) through their normal app.

Joshi explained that Uber, as a participant of the e-hail pilot, would be able to instead provide those wheelchair-accessible green cabs through their e-hail app. E-hail apps allow customers to hail a yellow or green cab with their smartphones.

Mohrer said Uber also protested the need to submit its dispatch data regularly and electronically. He said the company was concerned about that data being public.

Board members said it was ironic a tech company like Uber was refusing to go the digital route.