Proposed Committee Chance to Prove Climate Science Settled, So Why the Opposition? 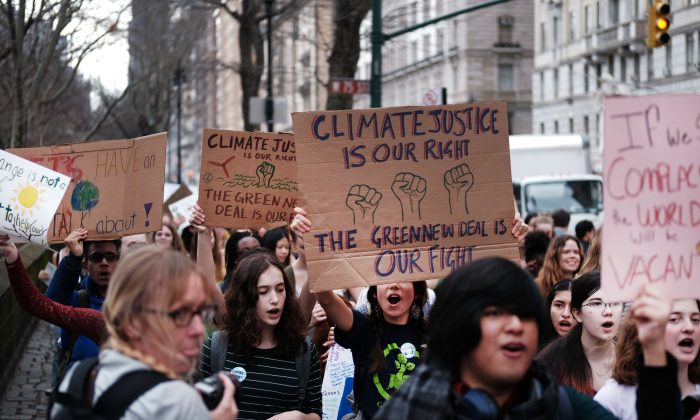 Students march to the Museum of Natural History to protest the lack of action on global warming and other climate related issues on March 15, 2019 in New York City. Spencer Platt/Getty Images

It’s sad, but the nature of public discourse today is becoming more and more about preventing public discourse. As often as people say they want to “have a conversation” about contentious issues, most really don’t. They want to stifle debate, not encourage it.

Terms like “hate speech,” “dog whistle,” and “denier” are routinely used in the effort to muzzle those who dare to disagree.

The reaction to the proposed Presidential Committee on Climate Security (PCCS) is just the latest example of the trend. The people and organizations that use the term “denier” to belittle anyone who disagrees with some portion of climate-change orthodoxy are apoplectic about the formation of such a committee. One cannot help but wonder why.

If the science is so abundantly clear that the climate is changing almost entirely because of human activities, that those changes are so terrible that extreme measures are called for—at whatever the cost—and that the United States can unilaterally implement mitigation that will have a meaningful and measurable effect, then I would think those who believe all of the above would welcome the creation of the PCCS.

It would provide them with a unique opportunity to prove how certainly the “science is settled” with respect to those diverse aspects of climate change I have described.

There’s no shortage of people who have no, or close to no, understanding of climatology, physics, atmospheric chemistry, thermodynamics, or the economics of emissions reductions who are ready to weigh in on climate change with all the certainty of scientists who were once sure that a mysterious substance named “phlogiston” was responsible for the phenomenon we call combustion.

In the late 18th century, the great French chemist Antoine Lavoisier definitively proved that phlogiston theory was so much hooey. His willingness to question the conventional wisdom of his day may or may not have contributed to him having his life and torso cut short by the mob and the guillotine in 1794.

Climate change alarmists rush to quote anyone who agrees with them as experts, such as the 58 military veterans who signed a letter belittling the proposed formation of the PCCS. If any of those veterans understand more about climatology, physics, atmospheric chemistry, thermodynamics, and the economics of emissions reductions than yours truly, I’d love to know it.

There is no doubt in my mind that none of them understand any of those issues to a degree that even begins to approach that of climate-change skeptics and professional climatologists such as Drs. Roy Spencer and Judith Curry.

I’m sure the veterans are well-intentioned, and I’m certain they are fully qualified to weigh in on questions such as, “If sea levels rise by X amount, will that affect our naval bases?” But are they experts in the incredibly complicated climate models that are used to predict disaster? Are they experts in all the complex physics and thermodynamics at play? Do they understand the tremendous cost of radical forms of mitigation such as eliminating fossil fuels? I don’t think so. So, thanks for your service, but please don’t use your position to give credence to science you don’t personally understand.

If you choose to trust alarmists such as Michael Mann and Gavin Schmidt, that’s your right, but that’s all you’re doing: choosing to believe, which is much different than knowing.

Alarmists have boxed themselves into a corner by belittling the PCCS concept. On the one hand, we’re to believe that their case is so incredibly strong that it should be accepted by everyone without question. On the other hand, given the opportunity to show how settled the science supposedly is, they decline to do so.

Presumably, either 1) they are unable to boil down the complex aspects of climate science to terms laymen can comprehend, meaning they are lousy teachers, or 2) the public is incapable of understanding, meaning we’re all a bunch of idiots.

Some have likened climate-change skepticism to belief in a flat Earth. Should the government sponsor a debate about the concept of a flat Earth? Well, if there was sufficient flat Earth belief out there so as to block desperately needed action to prevent a global catastrophe, yes!

Not only should we have that debate in those circumstances, but scientists would also be lining up in droves to destroy the flat Earth believers. There are so many easily accessible, understandable proofs that the Earth is spherical—proofs dating back to ancient Greece, by the by, that the debate would be a slam dunk victory for reason and sound science.

If climate change alarmists are certain that their evidence is as strong and compelling as all of the evidence demonstrating how the Earth is not flat, why would they not embrace the opportunity to do so on the big stage? After all, the fate of the entire planet is supposedly at stake. Wouldn’t a reasonable, responsible scientist take advantage of an opportunity like this one to save it?

Richard Trzupek
Richard J. Trzupek is a chemist and environmental consultant as well as an analyst at the Heartland Institute. He is also the author of " Regulators Gone Wild: How the EPA Is Ruining American Industry."