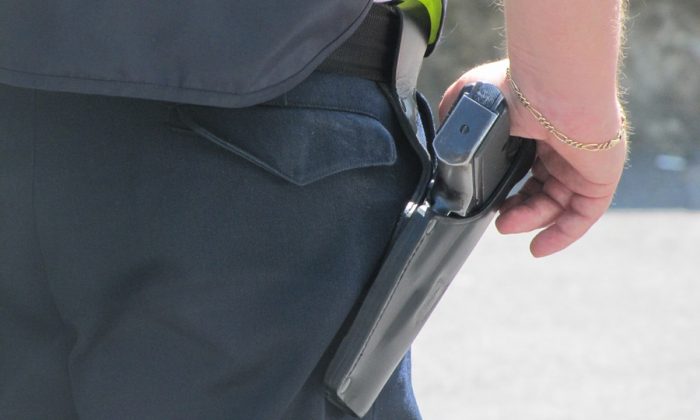 An updated version of a Kentucky bipartisan school safety law would require every school resource officer to carry a gun.

State Sen. Max Wise, a Republican, introduced Senate Bill 8, which would amend The School Safety and Resiliency Act of 2019 to require that all school resource officers in Kentucky carry firearms.

The Act, passed in response to the 2018 shooting at Marshall County High School that left two teenagers dead and 16 others injured, calls for a series of measures to enforce school safety, including one that requires every school have at least one school resource officer. However, the act does not specify whether those officers must be armed.

Under Senate Bill 8, however, the primary job function of a school resource officer is defined as someone who works with youth in school settings and is armed with a gun. This means every Kentucky school’s resource officer would be required to carry a firearm, if the bill is approved as is.

Wise, who also chairs the Senate Education Committee, told the Louisville Courier-Journal he was frustrated that members of Jefferson County Schools, the state’s largest district, were still debating whether guns should be allowed on campus at all.

“The inability of their school board to make some decision, has been very frustrating,” Wise said. “Being the largest school system, that needs to be addressed.” He added that he has received calls from teachers asking him for a legislation that would essentially bypass any school board decisions to make armed school safety officers mandatory.

Among other changes, the bill introduced on Jan. 10 also specifies a goal to have at least one school counselor in each public school and at least one counselor or other mental health services provider for every 250 students. It also specifies that police officers employed as school resource officers should be commissioned for four years, as long as they meet all the requirements for those positions.

Kentucky is known for being one of the most gun owner-friendly states in the country. Senate Bill 150, which was signed into law in March 2019 and took effect in June that year, allows gun owners in Kentucky to carry concealed weapons without a permit. It also removes the six-hour gun-safety training course, background check, and $60 application fee that the state previously required.