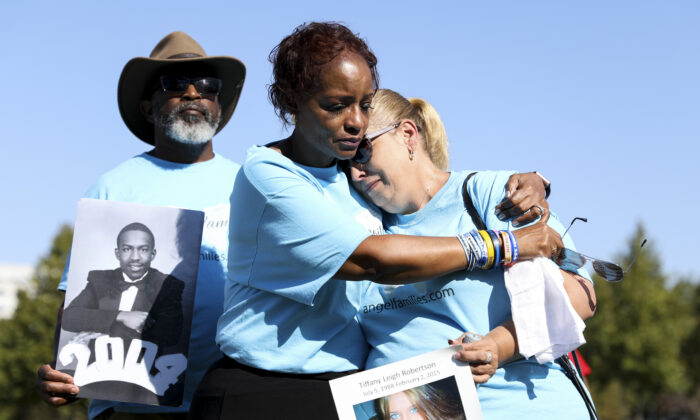 Angel parents comfort each other while holding pictures of their loved ones, who were killed by illegal aliens, at an event outside the Capitol building in Washington on Sept. 25, 2019. (Samira Bouaou/The Epoch Times)
Politics

Proposed Bill Would Open Sanctuary Politicians Up to Lawsuits

WASHINGTON—Under sanctuary policies, many jails release illegal immigrants who have been convicted or charged with a crime, despite a request from Immigration and Customs Enforcement (ICE) to hold the person for transfer of custody.

A bill sponsored by Sen. Thom Tillis (R-N.C.) aims to allow any subsequent victims of crimes committed by that illegal alien to sue the politicians who created the sanctuary policies.

The bill, Justice for Victims of Sanctuary Cities Act of 2019, was introduced in July to the Senate Judiciary Committee and a hearing was held Oct. 22.

“These reckless sanctuary policies are putting our brave law enforcement officers at risk and the general public in harm’s way,” Tillis said. “In many cases, I believe these serious crimes could have been avoided if local agencies simply complied with U.S. law and cooperated with ICE.”

Mary Ann Mendoza, an Arizona woman whose 32-year-old son was killed by an illegal alien in a 2014 car crash, testified at the hearing. She said the group she co-founded, Angelfamilies.com, would encourage American victims to sue their elected officials should the bill pass.

“We feel it will make elected officials think twice about placing irresponsible and dangerous policies in place putting American citizens in harm’s way,” Mendoza said after the hearing.

“Every day, Americans are being marginalized as collateral damage by this incredibly dangerous mindset that criminal illegal aliens deserve above-the-law protections while they remain illegally present in our country.”

The illegal alien who killed her son, police Sgt. Brandon Mendoza, had been in and out of jails in Colorado before he ended up in Arizona.

Mendoza said the man was “more than three times the legal limit drunk and high on meth, drove over 35 miles the wrong way on four different freeways in the Phoenix area, before slamming head-on into my son’s car going over 100 miles per hour.”

Mendoza also railed against politicians who call illegal immigrants “immigrants” and conflate them with those who enter the United States lawfully.

“I believe Angel Families would feel vindicated if they had a way to sue the very people responsible for the irresponsible, dangerous sanctuary policies these officials felt they had the authority to put in place with no public approval,” she said. “There is absolutely no logic in turning a dangerous criminal out onto our streets and certainly not an illegal criminal.”

Timothy Robbins, acting executive associate director for ICE Enforcement and Removal Operations, said if he was an illegal alien who wanted to commit a crime, “and not have to worry about being removed from this country, I would do it in a city that does not cooperate with ICE.”

According to research by the Center for Immigration Studies, almost 200 cities and counties have adopted sanctuary policies, as well as nine states.

“Sanctuary city policies that are trying to protect the community are doing the exact opposite. They’re allowing criminals to walk free and to victimize people within the community,” Robbins said. He warned that minor crimes often lead to significant crimes and recidivism rates remain high among criminals.

Sen. Dianne Feinstein (D-Calif.) said she was mayor of San Francisco in 1985 when she signed one of the first sanctuary bills in the country. California is now a sanctuary state.

Feinstein said sanctuary policies protect “law-abiding immigrants. They are not intended, and should never be used to shield dangerous criminals.”

But, Robbins said, “you cannot have it both ways.”

ICE is being pushed out of California jails, where it traditionally picked up almost all of the state’s illegal alien criminal population, he said.

“Increasingly, those who insist ICE must focus its enforcement resources on criminal aliens—which it does—are also attempting to restrict the agency’s access to these same criminals by curtailing jail interviews, limiting data sharing, and ignoring detainers,” he said.

He said thousands of the 165,000 detainers that ICE placed in fiscal year 2019 will likely be ignored, triggering the release of criminals. He said jails in sanctuary cities are releasing illegal immigrants who commit murder, rape, child molestation, domestic violence, and drunk driving, as well as gang members.

Currently, victims of crime committed by illegal aliens who have been released from jails under sanctuary policies are unable to sue. The parents of Kate Steinle—who was fatally shot in San Francisco by an illegal immigrant—were rebuffed by the 9th Circuit Court of Appeals in March, after trying to sue San Francisco and its former sheriff Ross Mirkarimi. The appeals court refused to reinstate the lawsuit.

Mirkarimi released Jose Inez Garcia-Zarate, a Mexican national, from jail three months before the shooting, despite a detainer lodged by ICE. Garcia-Zarate had already been deported five times.

Tillis said his bill includes a “safe harbor” provision that protects victims and witnesses of crimes, who some say may be scared to report crime if they themselves are in the country illegally. The Department of Homeland Security also has safe harbor protections.