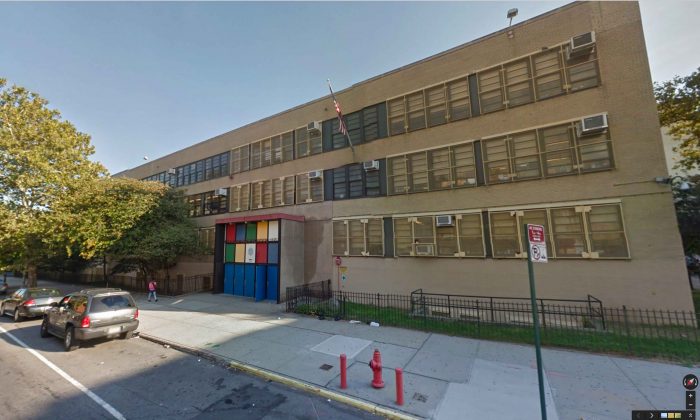 The New York Department of Education (DOE) announced on Dec. 14 a proposal to close three struggling schools at the end of the school year—a first in Mayor Bill de Blasio’s administration.

The Brooklyn schools—Peace Academy Middle School, The School for the Urban Environment, and Foundations Academy High School—have grappled with below-average academic performance and dwindling enrolment, according to DOE.

Parents were distressed by the sudden news of the potential closures, especially since two of the schools were part of Mayor de Blasio’s School Renewal Program announced in November 2014 to transform struggling schools over the next three years rather than close them.

The proposal will impact 217 students and 24 teachers across the three Bedford–Stuyvesant neighborhood schools.

The persisting challenges at the schools have led to high staff turnover and declining numbers of extracurricular and athletic activities, and a loss of per pupil funding damaging their ability to support student achievement even further.

NYC Schools Chancellor Carmen Fariña said closing the schools is a difficult decision; however, institutions with low enrollment would not have the ability to provide robust education for students.

“I am committed to holding all our schools accountable to meeting the needs of our students,” Fariña said in a statement on Dec. 14.

DOE is hosting a number of school community meetings in all three schools Dec. 17–22 to allow parents to voice their concerns.

About 10 parents attended the Peace Academy meeting on Dec. 17, along with DOE officials, school staff, and representatives for Assemblyman Walter Mosley and Councilor Stephen Levin.

Elizabeth Revels, whose son attends 7th grade at the school, was particularly concerned because she did not believe that the justifications to close the school were true.

DOE said in a statement that Peace Academy had the lowest middle school enrollment in New York City with only 47 students attending in the 2014–2015 school year. The school has suffered a 60 percent decline in enrollment since 2012.

Moreover, Peace Academy is not meeting its English Language Arts (ELA) target with only 2 percent of students considered proficient last year, according to DOE.

I’m very sad my son has to go, so now he’s going to be damaged.
— Peace Academy parent

Revels claims that the student population wasn’t growing because parents were told that there were no available places at the school during placement.

She says the poor academic performance is due to weak leadership—the school has had five principals since 2011. Moreover, she added that many parents had opted their children out of the exams last year, which would have affected the number of proficient students.

The school’s superintendent, Barbara Freeman, said at the Dec. 17 meeting that she would need to look into the claims.

Revels said she is also concerned about losing a stable environment for her son during his preteen and teenage years.

“I think it’s so unfair because a lot of kids form relationships with their teachers, as well as their administration staff, after school program staff, and their peers,” Revels said.

Another parent at the meeting expressed concern about how the closure would impact her son’s academic improvement.

“I’m very sad my son has to go, so now he’s going to be damaged. He already learned some stuff in this school now he has to go away,” she said in Spanish through a translator.

Like Peace Academy, DOE said the other two schools were proposed for closure based on similar considerations.

The School for Urban Environment had only 57 students enrolled in 2014–2015, making it the second lowest enrolled middle school in the city. Last year, no students at the school were proficient in the state English test.

Foundations Academy suffered from the lowest graduation rate in the city in 2013–2014 at 22 percent, compared to the city average of 68 percent.

Foundations Academy suffered from the lowest graduation rate in the city in 2013–2014 at 22 percent, compared to the city average of 68 percent. The high school continues to be in low demand, with only two eighth graders listing the school as their first choice.

Peace Academy and Foundations Academy are among the 94 schools participating in the mayor’s school renewal program.

The program aims to help renewal schools improve by providing extra funding and additional resources and support to students and families.

State Education Department Commissioner MaryEllen Elia said in a statement on Dec. 14 that educators and school leaders need to assess schools and determine their viability, and determine if they lack the ability to improve under the program. The two Brooklyn schools didn’t make the cut.

Despite the DOE’s efforts to include parents in discussion on the proposals, they are skeptical whether their views would be heard.

“My concern is I don’t believe that it’s just a proposal. I believe that they already have it in their mind to shut the school down and it’s unfair to the kids,” Revels said.

NYC Department of Education spokeswoman Devora Kaye said the department will work closely with families from each school.

“We are proposing to identify an alternate school for next school year that meets the family’s needs,” Kaye said via email.

The proposed school closures are still subject to approval and will be determined in February 2016.