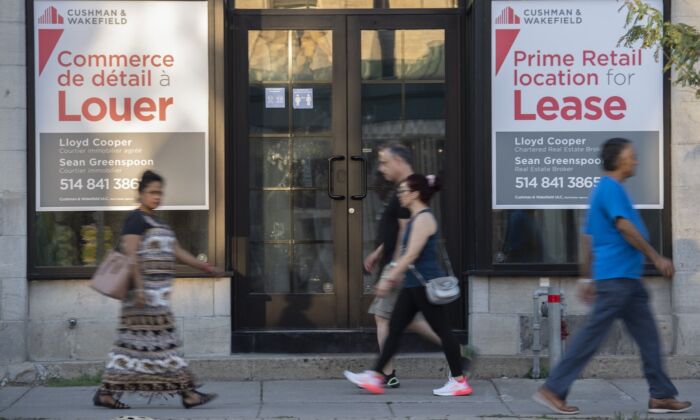 People walk by bilingual signs for a commercial space for lease in the city of Westmount on the island of Montreal on Aug. 5, 2022. (The Canadian Press/Graham Hughes)
Canada

The proportion of Canadians who mainly speak French at home continues to decline in nearly all provinces and territories, including Quebec, the latest census release shows.

Statistics Canada reported Wednesday that the percentage of Canadians who speak predominantly French at home fell to 19.2 percent in 2021 from 20 percent in 2016. All provinces and territories saw a drop other than Yukon, where the figure was up from 2.4 to 2.6 percent.

That’s while the proportion of people who report French as their first official language declined.

Éric Caron-Malenfant, deputy head of Statistics Canada’s Centre for Demography, said at a news conference that the latest census report shows a continuation of language trends in the country.

Jean-Pierre Corbeil, an associate professor of sociology at Laval University, said immigration plays a key role in the trends we see with languages in Canada.

“We know that the composition of the population over time has an impact on … the numbers of people speak French or English or, if you will, a non-official language,” Corbeil said.

A recent study by the Institut du Québec found that while non-permanent residents represented nine percent of international immigration to the province from 2012 to 2016, that number had climbed to 64 percent by 2019.

In Quebec, the number of Canadians who reported English as their first official language topped one million, while one in 10 Quebecers report speaking predominantly English at home.

As the country becomes more linguistically diverse, the percentage of Canadians who reported English or French as their mother tongue has also declined.

The agency defines mother tongue as a citizen’s first language learned at home in childhood and still understood by the individual.

Corbeil said that while some people put a lot of emphasis on French losing ground in Quebec, that phenomenon has already played for the English language in regions like Toronto, where nearly half of residents’ mother tongues are not English.

In 2021, 3.6 percent of arrivals outside of Quebec were French-speaking immigrants.

It would be more effective to direct French-speaking immigrants to Quebec, given the limited influence of the language outside of the province, said Charles Castonguay, a retired mathematics professor from the University of Ottawa who specializes in the language landscape of Canada.

“That will do much more to stabilize the weight of French in Canada than scattering these immigrants,” he said.

English-French bilingualism remained unchanged over the five-year period, with 18 percent of Canadians reporting they can conduct a conversation in both languages.

The census release comes after Quebec introduced a new language law this year that restricts access to government services in English. In June, Quebec Premier François Legault drew criticism for sounding the alarm over a decline in the number of people who speak French at home.

Legault declared that “nobody could deny” French is in decline, saying fewer Quebecers were speaking the language at home as well as at work.

Corbeil said the impact of Bill 96 would not be reflected in the data given it was passed this year.

“It’s really the immigration policy and immigration measures (where) I think the focus should be put, because it’s difficult actually to see … what are the measures that will have an impact on the language dynamics,” Corbeil said.

Statistics Canada will publish a census report on workplaces later this year that will shed light on languages spoken in work environments.