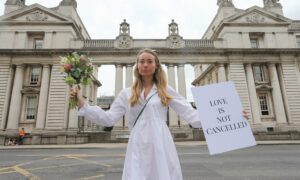 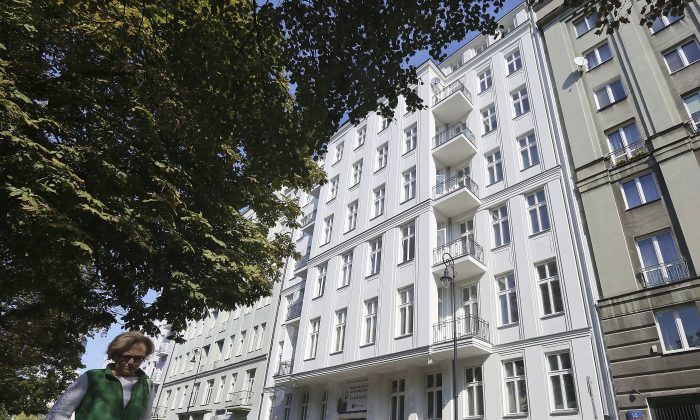 An apartment building freshly renovated by an international developer group that bought the house from the husband of Warsaw Mayor Hanna Gronkiewicz-Waltz, in Warsaw, Poland, on Sept. 19, 2016. Its previous ownership rights and its restitution to the Waltz family are one of the issues raised amid a current political storm. (AP Photo/Czarek Sokolowski)
Europe

Property Restitution an Issue in Poland Long After Communism

WARSAW, Poland—A Warsaw court had no questions when a landlord known for brutal evictions sought the return of an apartment house seized under communism from a Jewish woman. It was tenants who came forward with information that blocked the restitution, showing the woman — who would have been 106— died in 1974.

Poland is one of very few former communist countries that have no formal process for returning or compensating people for real estate seized, or “nationalized,” under communism following World War II. A number of draft restitution laws were knocked down by politicians, who argued that Poland could not afford an across-the-board solution. This week, Jaroslaw Kaczynski, head of the ruling Law and Justice party, announced plans for a commission to deal with the restitution and the irregularities that have resulted in the eviction of thousands of Warsaw residents.

The issue of restitution in Poland has a long and sometimes sordid history, punctuated by stories of big money, forged documents, evictions, even murder.

The Chinese Musician Who Chose Conscience Over Communism

Chinese Dissent in an Age of Social Media

Kaczynski’s announcement Tuesday took on political overtones as he targeted his main political opponents citing a “great injustice that has taken place in Warsaw,” and claiming to expose a “Mafia” made up of city “elites.” They are largely linked to Civic Platform, which lost last year’s parliamentary and presidential elections but still controls Warsaw.

City Mayor Hanna Gronkiewicz-Waltz, deputy leader of Civic Platform, is being blamed for failing to deal with restitution irregularities and her family has been accused of profiting from a questionable dealing. But she refuses to go. Ousting the mayor would give Kaczynski’s conservative party rule in Warsaw and would further weaken the Civic Platform, giving Kaczynski a much stronger chance of winning a second term in 2019 elections and continuing a policy that has raised concerns about democracy in Poland.

Warsaw Deputy Mayor Witold Pahl likened the special commission to an “inquisition” that would compromise and blame opponents of the current ruling government under the pretext of meting out popular justice.

The restitution problem goes back to a 1945 decree by communist leader Boleslaw Bierut that resulted in the seizure of thousands of Warsaw’s houses, plots of land and palaces from their owners, many of them Jewish. When communism was toppled in 1989, restitution of seized real estate became possible. But decades later there is still no comprehensive law to regulate the process, with officials relying on existing administrative regulations for guidance.

As a result, highly valuable property has been returned to people who, in many cases, have no connection to it. The new owners often raise the rent, cut utilities and bully the tenants out of homes they lived in and took care of for decades. They then sell the refurbished apartments for hefty sums, making fortunes.

Schools and kindergartens were also threatened with evictions, until a recent regulation backed by the mayor prevented that.

Jan Spiewak, a city councilor and head of The City is Ours, which has worked to fight what is being called “wild restitution,” says such cases are carried out by a “mafia of town hall officials, courts, lawyers and shady businessmen,” among them businessmen active in Switzerland, Cyprus and Russia and people with criminal records.

Jaroslaw Jozwiak, a former deputy mayor who was fired in the midst of the current restitution storm, said more than 5,000 properties have been returned and almost 2,000 are in the process. While in office, he defended the city’s restitution policy, under which tens of thousands of tenants have faced eviction. Some observers say the total value of claims could reach 20 billion zlotys ($5.2 billion).

The man who sought the property involving the 106-year-old Jewish woman, Fanny Ajzensztadt, was recently charged with lying to a court and may face prison.

In the case involving the mayor, her husband made millions of zlotys (dollars) from the sale of an apartment house originally owned by Jews, most of whom died in the Holocaust. The husband’s uncle bought the house in 1945 from a man who falsely claimed to represent the original Jewish owners. Though his claim was later proven fraudulent, the uncle nonetheless sought the return of the house, but died before the decision was made. After his death, the house was returned to his closest relative, the mayor’s husband, who quickly sold it to an international developer, Fenix Group, and the tenants were forced to leave, with no other accommodation offered.

Gronkiewicz-Waltz insists everything was legal. She says she is not guilty of anything and rejects calls she resign, saying she wants to devote the two remaining years of her term to exposing cases of irregularities. She stresses she was the one who successfully pushed for a partial regulation that took effect last month preventing evictions of schools and pre-schools.

She blamed the problems on the lack of a comprehensive restitution law, calling that the “heaviest sin of the transformation” to democracy.