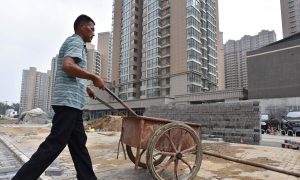 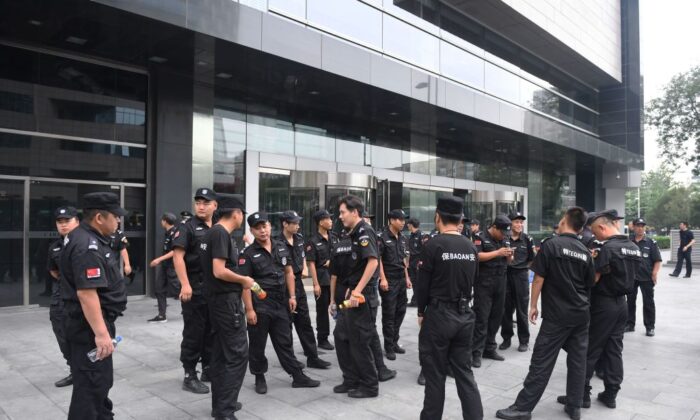 A Chinese bank had embezzled the supervisory funds belonging to the buyers of a real estate project in China. Hundreds of buyers launched a protest on Oct. 7.

The bank being accused of embezzlement is the Ningbo branch of the China-based Ping An Bank.

The local government has been asked to solve the problem of this unfinished real estate project, called Languang Yongjingwan, located in China’s Hangzhou Bay New Zone in Zhejiang Province.

According to the “Administration Measures for the Proceeds from Pre-sales of Newly-built Commodity Buildings” issued by the Chinese Communist Party (CCP), the establishment of supervisory funds is to prevent developers from running away with the money of property buyers.

On Oct. 9, a property buyer called Mr. Li told the Chinese language edition of The Epoch Times that due to the suspension of the real estate project, the houses will not be delivered to their buyers as scheduled on Sept. 30.

As a result, buyers of these properties had gone to government agencies at different levels to claim their rights, after which they learned from officials at the Bureau of Housing and Urban-Rural Development that some $10.85 million of their supervisory funds had been embezzled by Ping An Bank.

The bank has been deprived of the right to supervise any real estate projects in Hangzhou Bay New Zone for the next three year as punishment, authorities have said.

“We only know that they have taken our money away. As for their next step, we have no idea,” Li said, indicating that there is only $4.65 million left in the account for supervisory funds.

“Which regulations did the bank follow? Whatever the regulations may be, the bank should not have sacrificed the livelihood of these property buyers.”

Given that the employees of the sales department of this real estate project have all left and there’s only one security guard still there, the helpless property buyers came to the Ningbo branch of Ping An Bank on Oct. 7, shouting slogans and holding banners to defend their rights.

Starting from 1 p.m. to 11 p.m., there were about 400 to 500 property buyers at the scene, said Ms. Liu, a property buyer participating in the protest.

Two conflicts broke out during the hours-long protest, according to Liu. The first was when the Ping An Bank sent personnel to take banners off the protesters; the second when two protesters were targeted by police for allegedly shouting slogans too loudly.

“It’s indeed not easy for ordinary people like us to buy a home. Having spent our own money, we still got treated this way. There’s really nothing else I can say,” Liu said.

Negotiations between Ping An Bank, local authorities, and property buyers was held at the sales center of the real estate project on Oct. 9.

“We were told that the project will resume on Oct. 30, though the specific date is still subject to the construction site,” Li said.

“Since the subject of money was not mentioned, the government must have colluded with the bank, of which the personnel simply said that they will fully cooperate with the resumption of the project and gave some six guarantees,” Li added, believing that the government and the bank already had a private conversation in advance.

“The government also said that it’s impossible to make something out of nothing. What shall we do?” Mr. Li said, expressing his lack of confidence in the completion of the project.

According to the protesters, Languang Yongjingwan has a total of more than 70 buildings, including 18 small high-rise apartments and other villa-style buildings.

Li said that purchasers of the high-rise apartments were all workers in Ningbo city, including himself, whose job it is to carry boxes. Most of the buyers have borrowed either the savings of their parents or money from their relatives and friends to purchase the properties.

“It’s really hard. While waiting for the home I bought, I am also renting a property outside. Since I have no real estate certificate, I cannot enroll my kid at school,” Li said.

Having asked the media to voice their appeal, these property buyers now hope that the government can effectively solve this problem for them.

Pseudonyms were given for security reason.