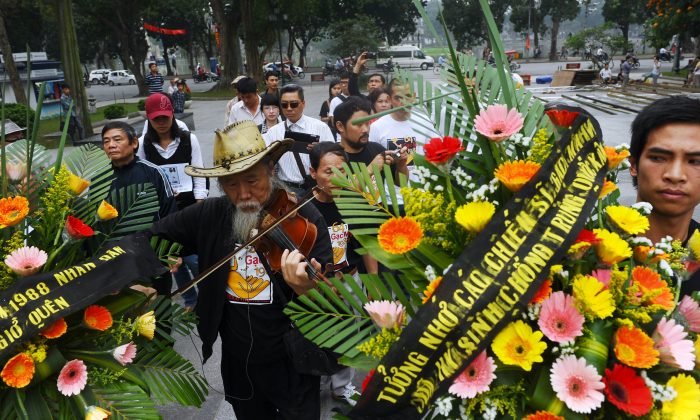 During a White House meeting this week with Vietnamese President Truong Tan Sang, President Obama has a golden opportunity to nudge Vietnam toward democracy.

The United States has repeatedly warned Vietnam that economic development and democracy must go hand in hand. Having brushed the warning off, the Vietnamese have seen their economy fall into a difficult situation. Concurrently, China–Vietnam relations are becoming bitter over the East Sea (as the Vietnamese call the South China Sea), even with utmost deference from Hanoi.

After the Vietnam War, U.S.–Vietnam diplomatic relations finally resumed in 1995. In 2001, both sides signed the Bilateral Trade Agreement (BTA), which opened the opportunity for new prospects for Vietnam. In 2007, the United States strongly supported Vietnam to become a member of the World Trade Organization (WTO). As a result, investment increased and trade flourished. By 2012, two-way trade between Vietnam and the United States reached $25 billion, and 15,000 Vietnamese students were permitted in the United States. Additionally, a fresh and dynamic young middle class has been emerging in our society along with the Internet boom era.

Instead of reforming the out-of-date political system to further socio-economic development, the Politburo of the Vietnamese Communist Party, fearing its loss of power, has mixed socialism with capitalism in what it calls a “socialist-oriented market economy.” It naively thought that capitalist money combined with strong political support from China would help it gain prosperity to achieve its dream of socialism. As a result, the economy has been suffering since 2010. According to a World Bank estimate, in 2013, growth is at approximately 5 percent, while inflation is more than 8 percent. There is also great risk of losing economic sovereignty and sea-territorial sovereignty (the Paracel Islands and most of the Spratly Islands) to the hands of China. Both catastrophes provoked widespread popular protests across the country, and are gravely threatening the leadership of the Vietnamese Communist Party, as never seen before in its history.

Vietnam is 1 of the 10 members of the Association of Southeast Asian Nations (ASEAN). Eight of the 10 ASEAN members are democratic countries, including Burma (also known as Myanmar), which will soon be democratic as well. How can Vietnam go against the common sense and common political will of the whole bloc? A new Vietnam, free and democratic, is a prospect long-awaited by ASEAN and by the United States, which is willing to incorporate Vietnam into the Trans–Pacific Partnership (TPP) and a more significant role in the Asia–Pacific region.

Perhaps most welcoming and encouraging of a new free and democratic Vietnam would be the Vietnamese people, who have long been struggling for freedom, rule of law, and a new national policy responsive to their best interests and contributing respectfully to ASEAN’s role in a new world order. The democratization of Vietnam would put the wind at our backs at this historic moment. Indeed, the relations between the United States and China are changing fast toward “Cooperation in Competition”/“Competition in Cooperation.” Vietnam’s democratization would bring peace and stability to ASEAN, while non-allied and regional cooperation will benefit all, including developed and developing countries around the world.

Vietnam is suffering an ill economy and grave menace from China. In that context, Vietnamese President Truong Tan Sang urgently asked the United States for a state visit. Obama responded favorably, and scheduled a meeting for July 25 at the White House. Human rights and strategic partnership topics will be high on their agenda. The United States is trying to rebalance its strategy in the Asia–Pacific region as its core interest. The main economic tool to put in place is the TPP, placing Vietnam as one of soon-to-be 12 total partners in this multilateral negotiation.

I respectfully suggest and demand that President Obama advise President Sang to listen to the will of the people and democratize Vietnam. That would be the best way for Vietnam to become a member of TPP and to secure a comprehensive strategic partnership with the United States.

Dr. Nguyen Dan Que is a nominee for the 2013 Nobel Peace Prize by a group of members of the U.S. Congress and Canada’s Parliament. He is a physician and head of the Non-Violent Movement for Human Rights in Vietnam. He has been imprisoned for his beliefs three times for a total of 20 years in Vietnamese prisons.