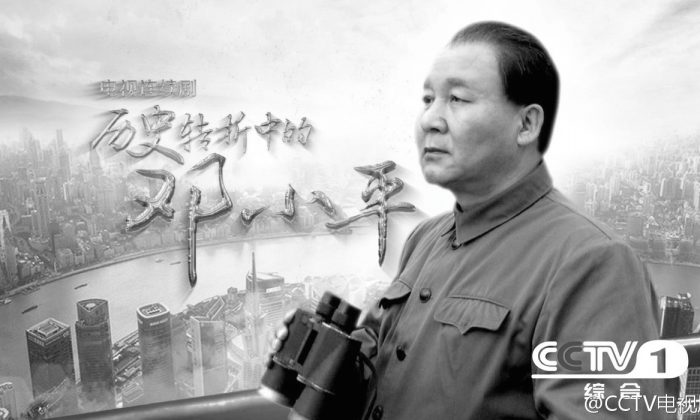 An advertising poster for the miniseries "Deng Xiaoping At History's Crossroads," produced for the 110th anniversary of his birth, in a screenshot from Sina.com on Aug. 12, 2014. Some observers have equated the series' depictions of political struggle to current goings-on. (Epoch Times)
China

Propaganda Miniseries May Hint at New Era for Chinese Regime

The opening episode of a new mini-series of rousing state propaganda in China focuses on the “smashing” of the Gang of Four, a group of old guard political operators in the Party that had wrought havoc for years, most notably during the Cultural Revolution. The documentary is a paean to the emergence of Party reformist Deng Xiaoping in the late 1970s, but observers in China see the documentary as commenting on current events in the guise of relating history.

In the film, Hua Guofeng, the Party leader at the time (until being shoved aside by Deng), pronounces: “Comrades … Today, we have acted according to Chairman Mao’s will, and, representing the entire Party, military, and the basic interests and wishes of people from all ethnicities, have in one stroke smashed the ‘Gang of Four.'”

He continues: “Our victory in this struggle means our Party has avoided a great catastrophe.” The destruction of the Gang is widely seen as a necessary prelude to the reforms that allowed China to emerge onto the world stage.

The production is a state-sponsored celebration of the life of Deng Xiaoping, as the 110th anniversary of his birth approaches on Aug. 22. Deng emerged from the wreckage of the Maoist era and set the stage for China to undergo several decades of “reform and opening up.”

The series contains rare depictions of inner-Party struggle and fighting, usually a strict no-go zone for state mouthpieces like China Central Television, which produced this serial—and this has led some observers to draw comparisons with current goings-on.

Close watchers of China’s political system could not help but notice, for example, the intriguing parallels between the depictions of the 1970s in the docu-drama and what is taking place now on the Chinese political scene, where Xi Jinping, the Party leader, is leading a no-holds-barred charge against another old guard faction—the one set up by Jiang Zemin, whom Deng had reluctantly appointed.

Zhuang Feng, a columnist on contemporary Chinese politics, titled a recent article on the series “Xi Jinping Might Use the ‘Gang of Four’ Style Arrests to Eliminate Jiang’s Faction.” The article said, “if this happens in today’s China, the dangers it faces may be greater than taking down the Gang of Four, but at the same time, its historical significance will be the setting off of an era.”

There are particularly rich and suggestive resonances in this comparison, given that the purge of the Gang of Four ushered in a new political era for the Communist Party. With Mao’s death, the period of mass mobilization came to an end, as Deng began to allow small reforms, and eventually, in the early 1990s, to earnestly push forward a freer market.

Jiang came to power after the Tiananmen massacre of 1989, and stayed as head of the Communist Party until 2002. He left his final position as military chief in 2004, but kept a hand in the top level of Chinese politics for almost the entire reign of his successor, Hu Jintao.

During the 2008 Olympics, for example, Jiang placed himself right next to Hu in major photographs, a place normally reserved for the premier, not a retiree with no official position. In the leadership changeovers in 2002 and 2007, Jiang fought hard to install into the Politburo Standing Committee officials that were loyal to him—in particular those that showed an interest in pursuing his pet political campaign, the persecution of Falun Gong.

These included Zhou Yongkang, the former chief of the security apparatus, who has been taken down in a long running probe by the current Party chief Xi Jinping. Xi has made a sweep of many of Jiang’s other appointees and loyalists, including Bo Xilai, a former Politburo member who got into trouble even before Xi assumed power, and Gen. Xu Caihou, a former vice chair of the Central Military Commission.

Zhuang Feng and other analysts see changes of this sort in the same way as the monumental shift in political power following the destruction of the Gang of Four—a new configuration of power, again into the hands of a single strong leader.

But if Xi Jinping’s ongoing destruction of Jiang Zemin’s political network is to be seen in a light similar to the takedown of the Gang of Four, the next stage in the pattern is not yet clear, and the drama gives no suggestions as to what China may expect.

The serial is noteworthy otherwise for its portrayal of top Communist Party political figures that for decades have been marginalized or off limits entirely in mainstream political discourse.

These include Hua Guofeng, the Party leader who directly followed Mao Zedong, Hu Yaobang, a reformist whose death sparked the 1989 Tiananmen demonstrations, and Zhao Ziyang, the Party secretary at the time who sympathized with the protesters and was later purged by Deng Xiaoping and Party elders, in part for his failure to endorse the violent crackdown.

In other ways, the drama hews closely to the staples of Party propaganda: regime leaders are portrayed as wise, humble, and always drawing from the masses for encouragement and support. The central conceit of the start of the plot—that it was Mao Zedong who wished the Gang of Four to be taken down—is abject fabrication.

On that matter, Zhang Ming, a professor at Renmin University in Beijing, posted this to Sina Weibo: “Tonight a journalist from Hong Kong asked me what I think about the portrayal in the drama serial of Mao arranging for the destruction of the Gang of Four before he died. I burst out laughing. If only I could encounter something as funny as that every day—I wouldn’t have to see a doctor for the rest of my life.”