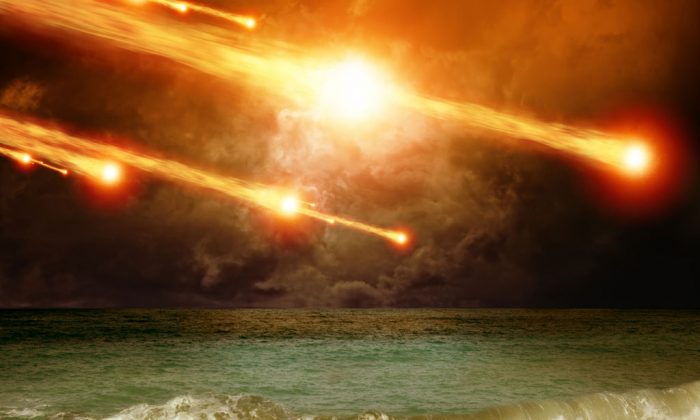 Three former astronauts have presented evidence that Earth has experienced many more large-scale asteroid impacts over the past decade than previously believed.

In fact, they say, the number is anywhere from three to 10 times more.

According to reports, a new visualization of data from a nuclear weapons warning network shows that “the only thing preventing a catastrophe from ‘city-killer’ sized asteroids is blind luck.”

The astronaut group says that since 2001, 26 atomic bomb-scale explosions have taken place in remote locations around the world, far from populated areas, as evidenced by a nuclear weapons test-warning network. In a recent press release regarding them, the B612 Foundation’s CEO, Ed Lu, said:

“This network has detected 26 multi-kiloton explosions since 2001, all of which are due to asteroid impacts. It shows that asteroid impacts are NOT rare–but actually 3-10 times more common than we previously thought. The fact that none of these asteroid impacts shown in the video was detected in advance is proof that the only thing preventing a catastrophe from a ‘city-killer’ sized asteroid is blind luck. The goal of the B612 Sentinel mission is to find and track asteroids decades before they hit Earth, allowing us to easily deflect them.”

The B612 Foundation has partnered with Ball Aerospace to build the Sentinel Infrared Space Telescope Mission, which, once positioned in solar orbit closer to the sun than the earth, will look outwards in infrared to detect hundreds of thousands of as-yet-unknown near-Earth objects that are larger than 140 meters. This privately funded space craft is scheduled to launch in the 2017-18 time frame aboard a SpaceX Falcon 9 rocket.

Leonard David at Space.com noted that bureaucratic inertia is making it more difficult for researchers to study and characterize asteroid strikes on Earth, which are apparently much more common than previously thought.

The red tape affects the use of the U.S. government’s space assets that assist scientists in the study of “airbursts” like the meteor that exploded without warning over Russia in 2013. “At issue,” wrote David, “is the ability to combine space data with outputs from a global network of seismic, infrasound and hydroacoustic sensors that have been deployed worldwide to provide treaty verification for a nuclear test ban.”

The network, known as the International Monitoring System (IMS is managed by the Comprehensive Nuclear Test Ban Treaty Organization [CNTBTO]), has in recent years detected shock waves from a number of airbursts, which has provided additional evidence of more frequent asteroid impacts.

“Ideally, matching observations from spacecraft with measurements from CTBTOs infrasound detectors would give scientists more of a heads-up on what’s raining down on Earth,” David wrote.

In 2013, the Air Force’s Space Command signed a memorandum of agreement with NASA’s Science Mission Directorate. The document, signed Jan. 18, listed a number of specifics for the public release of meteor data from sources like high-flying, secretive federal government space sensors.

With the agreement, NASA’s Near Earth Object Observation Program started taking in information on airburst events that were based on an analysis of data collected by federal government sensors.

*Image of “asteroids” via Shutterstock