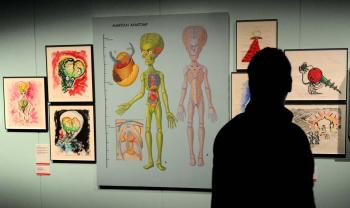 A Visitor looks at the Anatomy of a Martian at a major exhibition, presented as part of Melbourne Winter Masterpieces 2010, which explores the full career of artist and film maker Tim Burton, as a director, concept artist illustrator and photographer. (WILLIAM WEST/AFP/Getty Images)
Science

Resa Xu
View profile
Follow
biggersmaller
Print
Proof of the existence of aliens may come within 25 years, according to Senior Astronomer Seth Shostak.

Shostak is an astronomer at the Search for Extraterrestrial Intelligence Institute (SETI) in Mountain View, California. He used the Drake Equation for his estimates. The formula calculates “the number of alien civilizations with whom we may be able to communicate.”

The equation involves many complex factors, including star formations in the galaxy, the number of stars that have planets orbiting them, the number of planets that are habitable, and also those that have life on them.

There have not been credible numbers calculated yet, but astronomers estimate the number of alien civilizations lie between 10,000 and 1 million.

“That's the range of estimates from people who have started and worked on SETI," said Shostak. "These people may know what they're talking about. If they do, then the point is we trip across somebody in the next several dozen or two dozen years."

Shostak admitted that even if we are able to receive signals from extraterrestrials, understanding what they are saying would be difficult because they may be more technologically advanced.

But, the proof of alien existence would be an incredible feat nonetheless.