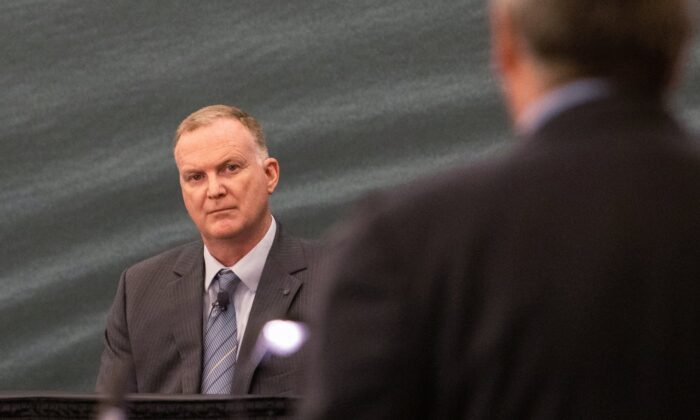 Chief Supt. Darren Campbell is questioned by lawyer Robert Pineo at the Mass Casualty Commission inquiry into the mass murders in rural Nova Scotia on April 18/19, 2020, in Halifax on July 26, 2022. (The Canadian Press/Kelly Clark)
Canada

Prompt Warning of NS Killer’s Replica Car Would Have Been ‘Helpful’: Senior Mountie

A senior Mountie testified today that he would have liked to have seen a quicker warning to the public in 2020 that an active shooter in Nova Scotia was driving a replica RCMP cruiser.

Chief Supt. Darren Campbell made the comment during testimony before a public inquiry looking into the events of April 18-19, 2020, when a 51-year-old gunman drove the mock patrol car around the province, murdering 22 people.

He testified that the RCMP’s commander on the scene had complete authority to order that the information be made public and needed no approval from a superior such as Campbell.

The inquiry has heard that the commander delegated an officer to have communications staff alert the public about the replica vehicle shortly after 8 a.m. on April 19, but the tweet providing the information only went out at 10:17 a.m.

At least six of the victims were killed during that time period.

In his second day on the stand, Campbell, who led the investigation into the mass shooting, faced cross-examination from lawyers representing 14 of the 22 victims’ families.

He acknowledged that families did not receive adequate support from the RCMP after the mass shooting.

Asked if the care of families met the minimal level of care, Campbell responded, “I would say ‘No’, because if it was good, there would be no complaints,” he said.

He testified that he favours the creation of a “national level team” of RCMP officers trained to respond with “multiple resources and multiple services” to address the needs of families after major incidents like the mass shooting.

After the shootings, the RCMP assigned a single officer who didn’t have formal training to be the liaison officer between the force and 21 of the families, while they provided two liaison officers for the family of Const. Heidi Stevenson, an RCMP officer who was killed.

“I think there should be a team … that addresses the needs of families, and that team should be trained,” said Campbell.