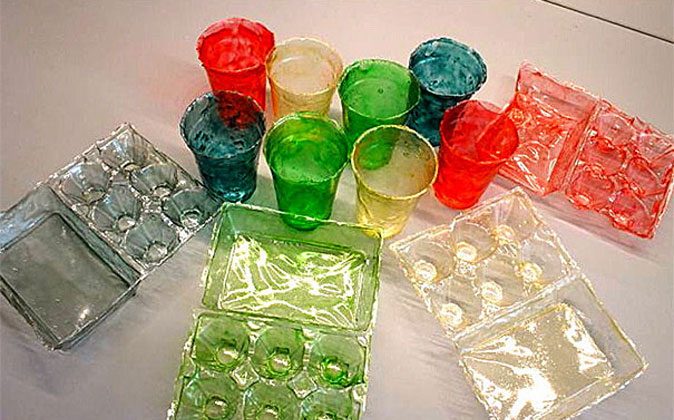 For many people, “plastic” is a one-word analog for environmental disaster. It is made from precious petroleum, after all, and once discarded in landfills and oceans, it takes centuries to degrade.

Then came apparent salvation: “bioplastics,” durable substances made from renewable cellulose, a plant-based polysaccharide. But problems remained. For one, the current bioplastics do not fully degrade in the environment. For another, their use is now limited to packaging material or simple containers for food and drink.

Now researchers at Harvard’s Wyss Institute for Biologically Inspired Engineering have introduced a new bioplastic isolated from shrimp shells. It’s made from chitosan, a form of chitin — the second-most abundant organic material on Earth.

Chitin, a tough polysaccharide, is the main ingredient in the hardy shells of crustaceans, the armorlike cuticles of insects, and even the flexible wings of butterflies.

The Wyss Institute makes its shrilk from chitin from shrimp shells, most which would otherwise be discarded or used in fertilizer or makeup, and a fibroin protein from silk. Researchers discussed it in a March online study in the journal Macromolecular Materials & Engineering.

Shrilk is cheaply and easily fabricated by a novel method that preserves chitosan’s strong mechanical properties. The researchers said that for the first time, this tough, transparent, and renewable material can be used to make large, 3-D objects with complex shapes using traditional casting or injection-molding techniques. That means objects made from shrilk can be mass-manufactured and will be as robust as items made with the everyday plastics used in toys and cell phones.

“There is an urgent need in many industries for sustainable materials that can be mass produced,” Wyss Director Donald E. Ingber said in March. “Our scalable manufacturing method shows that chitosan, which is readily available and inexpensive, can serve as a viable bioplastic that could potentially be used instead of conventional plastics for numerous industrial applications.”

This environmentally safe alternative to plastic could also be used to make trash bags, packaging, and diapers.

Once discarded, shrilk breaks down in just a few weeks — and even releases rich nutrients that support plant growth. In one experiment, Wyss Institute researchers grew a California black-eyed pea plant in soil enriched with its chitosan bioplastic. Within three weeks, the material encouraged plant growth.

In environmental terms, finding viable alternatives for conventional plastics — prized for their lightness, durability, and low price — is an urgent matter. In the United States alone, according researchers at Columbia University, about 34 million tons of plastic waste is generated every year; less than 7 percent is recovered for recycling.

Meanwhile, according to the same researchers, plastics buried in landfills will take 1,000 years to degrade. Plastics discarded into the world’s seas — an estimated 100 million tons so far, circulating in vast oceanic gyres — are a threat to marine life.

This story is a combination of two press releases issued by the Wyss Institute in March and May. To read the original releases, Manufacturing a solution to planet-clogging plastics and Chitosan bioplastic, visit the Wyss Institute website. Republished from Harvard Gazette.