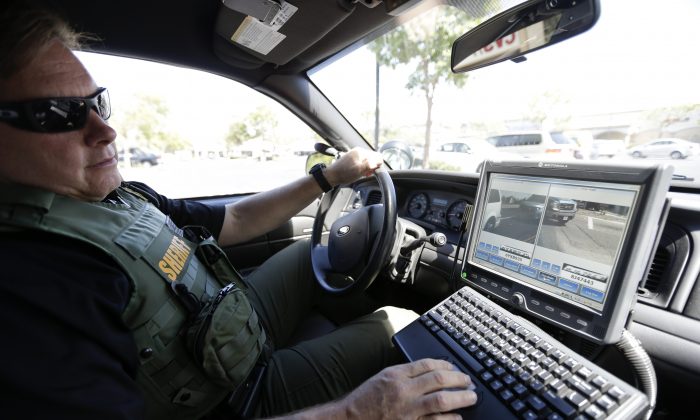 In this file photo, a San Diego County Deputy Sheriff looks at a monitor as his vehicle reads the license plates of cars in a parking lot in San Marcos, Calif., on Sept. 17, 2014. (AP Photo/Gregory Bull)
Tech

Hours after Vester Flanagan murdered two of his colleagues on live television, Virginia police tracked him down on the interstate highway, after which Flanagan killed himself.

The police were aided by automatic license plate readers (LPR), cameras distributed at tolls, checkpoints, and intersections that check a vehicle’s plate number against a hot list of vehicles belonging to criminals. The technology has been helping police catch criminals and issue fines for the last 25 years, but in the era of big data, newer applications of the tool are starting to fall into question.

LPRs were first adopted in Britain in the 1990s to combat the terrorist campaigns of the Provisional Irish Republican Army. In 1998, the technology spread to the United States—first used by the U.S. Border Patrol. It has since been deployed by tens of thousands of police departments across the country.

A 2012 survey by the International Association of Chiefs of Police  (IACP) found that 23 percent of police departments had an LPR system.

Apart from looking out for dangerous criminals on the loose, LPRs have been used to crack down on auto-theft, which anecdotal evidence suggests has been extremely effective. A study of police in Cincinnati found that units with LPRs had 250 percent more followup arrests than units without them, and in New York City, arrests for grand larceny auto rose 31 percent in the first quarter of 2011 from the same period in 2010, according to a RAND Corporation report.

One of the more oblique features of LPRs is the potential for crime prediction through data analysis.

The tool has also been a revenue booster for municipal governments. The city of New Haven generated $40,000 in parking fines during the first 12 hours that its LPR system went online, and in 2011 New York City issued more than 35,000 parking violations with the help of LPRs.

One of the more oblique features of LPRs is the potential for crime prediction through data analysis; by looking at when and where criminals are driving, the police can find patterns so as to better prioritize their investigations into future criminal activity.

For example, the tool could be used to identify car theft patterns to help the police locate “chop shops,” where stolen vehicles are torn apart for their components, which are then resold.

But effective analysis requires the retention of LPR data for long periods of time—in the absence of regulations, many departments could in theory keep their date indefinitely—and many departments have done just that. This has provoked outcry from civil liberty activists that the practice is on the slippery slopes to a dystopian surveillance state.

“The tracking of people’s location constitutes a significant invasion of privacy, which can reveal many things about their lives, such as what friends, doctors, protests, political events, or churches a person may visit,” the ACLU wrote on its page on LDRs.

“Automatic license plate readers have the potential to create permanent records of virtually everywhere any of us has driven, radically transforming the consequences of leaving home to pursue private life, and opening up many opportunities for abuse,” the ACLU continued.

Some argue that an extensive LPR system violates our Fourth Amendment rights, but it’s unlikely the issue will ever be settled in court.

Some argue that an extensive LPR system violates our Fourth Amendment rights—against unreasonable search and seizures—but it’s unlikely that the issue will ever be settled in court. The evidence gathered from LPRs are rarely, if ever, the basis for an arrest.

“If cases aren’t being brought forth that are directly built on the use of LPRs, then there’s not a mechanism for the normal constitutional challenge where a criminal defendant charged with a crime challenges a search and seizure” said James Anderson, a researcher at RAND and the co-author of a report on LPRs. “Instead the police use intelligence in a longer-term kind of way and identify a particular suspect by gathering other evidence.”

In lieu of a unified law, a patchwork of restrictions are being imposed on a state-by-state basis. Maine requires LPR data to be deleted after 21 days, in Missouri it’s 20 days, and in Minnesota a full-year. A recent IACP survey found that slightly less than half of departments with LPRs don’t have a data-retention policy, but that figure will probably decline as more states, like California, issue their own restrictions.

“It’s incredibly decentralized,” Anderson said. “There’s no institutional mechanism other than constitutional restrictions to roll out a nationwide policy.”

Privacy concerns aside, the question of just how useful the long-term retention of data will be for crime-reduction remains an open ended question, and might remain so indefinitely, as disclosing how the pattern detection system works could alert criminals and render it even less useful.