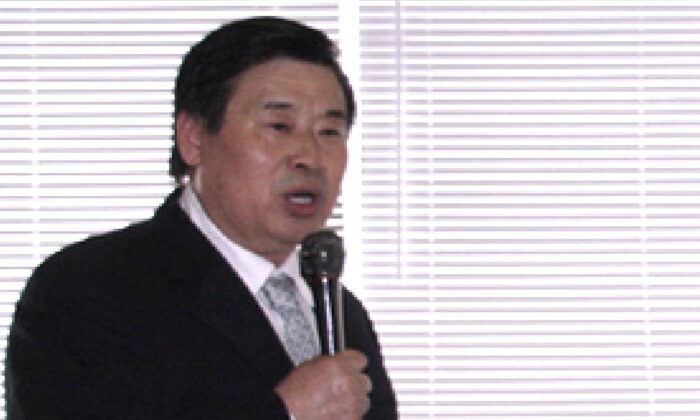 Wang Shujun in an undated photo. Wang, secretary-general of a Queens-based Chinese pro-democracy group, was arrested in New York City on March 16 on charges relating to acting as an agent for China. (The Epoch Times)
Infiltrating the West

A prominent Chinese American dissident was recently arrested in New York City, accused by the FBI of working as an informant for Chinese intelligence for 17 years.

Wang Shujun, 73, of Queens, was one of five defendants charged in separate cases unsealed on March 16, that federal prosecutors said were part of the communist regime’s broader campaign to harass, intimidate, and spy on overseas Chinese dissidents.

Two of the defendants, including Wang, allegedly worked for the Ministry of State Security (MSS), the Chinese regime’s top intelligence agency. In recent years, individuals associated with the agency, including hackers, spies, and company insiders, have been exposed by U.S. authorities for espionage activities.

Wang is a well-known figure in dissident circles and the Chinese diaspora community in New York City. He was among a group of dissidents who co-founded the Queens-based Chinese pro-democracy nonprofit Hu Yaobang and Zhao Ziyang Memorial Foundation in 2006. He served as secretary-general of the foundation, named after two former reformist leaders of the Chinese regime.

According to a criminal complaint unsealed on March 16, Wang, who was once a professor in China, became a naturalized U.S. citizen in 2003. Between January 2016 and August 2021, he spied on his fellow dissidents and worked as a mole in the foundation, the court document said. He reported to four different MSS handlers, and at least one Hong Kong pro-democracy activist whom he provided information on was subsequently arrested by Chinese authorities.

Hu Ping, who was a co-founder of the foundation, told The Epoch Times that he was not surprised that the Chinese Communist Party (CCP) was infiltrating the overseas Chinese pro-democracy movement, given that the regime could exploit the openness of American society.

“Surely the Chinese Communist Party would send its agents or try to turn one of us into an informant. Either way, it is extremely likely,” Hu said.

According to Hu, Wang isn’t the only one and there are more like him.

“They play different roles, with some intentionally trying to sing a different tune at some organizations with the aim of fomenting discord,” Hu explained.

To the best of his knowledge, Hu said he is aware that some people in pro-democracy circles in the United States are CCP agents, but the FBI has not detected them.

He added that the Chinese regime would offer money or business opportunities in China as incentives to induce individuals into working as agents for Beijing.

Wang began providing information to the MSS “at least in or about 2005” according to the complaint. However, the court document only detailed his alleged crimes between 2016 and 2021.

Two of his handlers were from the state security bureau in the northeastern Chinese city of Qingdao, where he used to be a local college professor before moving to the United States, the complaint said. The other two handlers worked for MSS’s bureau in southern China’s Guangdong Province.

He communicated with his handlers through either face-to-face meetings while he was visiting China, messaging apps, or emails in which he wrote up information he collected into “diaries.”

“These ‘diaries’ included details about Wang’s private conversations with prominent dissidents as well as the activities of pro-democracy activists and human rights organizations,” the complaint said.

One of the diaries Wang wrote dated March 15, 2016, when he shared his “analysis” of possible protests during the upcoming U.S. visit by Chinese leader Xi Jinping.

“Wang provided the name of the individual planning these demonstrations and shared another individual’s assessment that the planners might not be as ‘aggressive as last year,’” according to the complaint.

Xi attended the Fourth Nuclear Security Summit in Washington on April 1, 2016. A year later, he met with former U.S. President Donald Trump at Mar-a-Lago in Florida.

The court document also said the Hong Kong politician was arrested on April 18, 2020, before he was given two concurrent jail sentences of 18 months on May 28, 2021.

These descriptions clearly indicated that Wang’s target was Albert Ho, who was among four Hong Kong pro-democracy activists sentenced for their roles in an unauthorized protest in Hong Kong on Oct. 1, 2019.

Wang wrote in one undated diary about the Hong Kong politician’s views on whether the city’s chief executive would be reelected.

The complaint noted that Wang’s effort to provide the MSS information on the Hong Kong politician “likely represented only a portion of a multifaceted effort by the PRC [People’s Republic of China] government to track [Ho].”

Wu Zuolai, a U.S.-based Chinese scholar who survived the 1989 Tiananmen Massacre, believed Wang made an unwise decision when he allegedly agreed to become a CCP agent.

“You have already moved to the United States, enjoying the many benefits of living in a free society. Yet you are still working for the CCP,” Wu told The Epoch Times, referring to Wang.

The MSS looks for certain types of individuals in their hunt for possible agents. According to Wu, the agency would look for people who enjoy a certain social status in Europe or the United States, and offer them certain benefits such as the willingness to take care of their troubles back in mainland China.

For example, if a targeted individual is on the verge of losing his house in China due to forceful demolition, the MSS might intervene and have the local security bureau stop the house from being torn down, Wu said. By doing the individual a favor, the person is likely to reciprocate and provide the information that the MSS is seeking, he added.

According to Wu, the MSS also sees Chinese nationals taking up positions abroad as potential agents.

Justin Yu, former president of the New York-based community group Chinese Consolidated Benevolent Association, echoed Wu’s assessment, saying those who have chosen to live American should not do what Wang has allegedly done.

“We must defend America and refuse to be the pawn of foreign political parties to disrupt America,” Yu told The Epoch Times.

Wang has been charged with acting as an agent of the PRC government, criminal use of means of identification, and making materially false statements in connection with his participation in a transnational repression scheme orchestrated by the MSS, according to the DOJ.

If convicted, Wang could face a maximum penalty of 20 years in prison.

Chang Chun and Cai Rong contributed to this report.