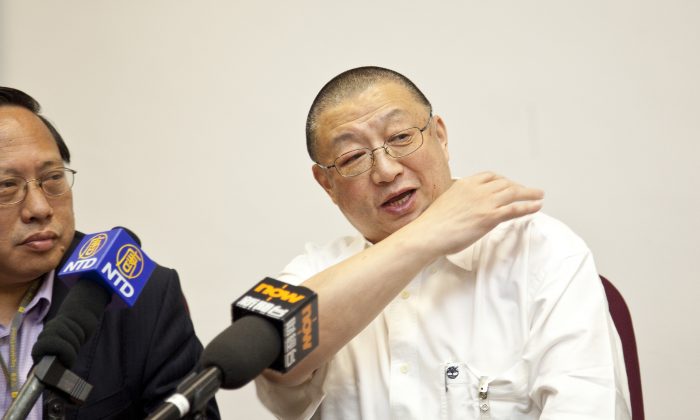 Chen Ping (R), at a press conference on June 5, explains how he was beaten by thugs outside his Hong Kong office on June 3. Hong Kong pro-democracy legislator Albert Ho sits to his left. “Maybe I offended a few people in the Chinese Communist Party regime,” Chen Ping said, in an attempt to explain his treatment. (Yu Gang/The Epoch Times)
China

A prominent publisher and outspoken critic of the current Hong Kong administration and its ties to Beijing was assaulted after work on June 3, the eve of the city’s enormous Tiananmen Square massacre anniversary vigil.

Chen Ping is the billionaire owner of iSun Affairs, a magazine that reports regularly and in depth on what the Chinese regime considers sensitive politics issues, and the Sun TV television channel. He was ambushed as he was getting into his car by two young men armed with clubs; they fled after doing their work on him. Chen was hospitalized but survived the beating without severe injuries. The police are investigating the attack.

Except for his frequent publication of “sensitive political issues” in iSun Magazine, which is banned in mainland China, Chen had no other explanation for the attack.

“We strongly condemn such thuggish behavior in the free society of Hong Kong with rule of law” said Chen in a statement to the South China Morning Post. “We appeal for police to quickly track down the culprits in order to maintain a free, independent environment for the media.”

The possibility that the attack was orchestrated to punish Chen was raised at a press conference on June 5. “I don’t think I’ve offended the mafia, but maybe the mafia-types were told what to do by certain other people,” Chen said. “Maybe I offended a few people in the Chinese Communist Party (CCP) regime.”

Hong Kong legislator Claudia Mo proposed a scenario along similar lines: “It’s possible that this was a vendetta. They wanted to teach him a lesson, and scare him—but not kill him.” Violence of that sort will have a chilling and suppressive effect on other media, and possibly influence what they write on political topics, she said.

A possible catalyst for the attack may have been the January issue of iSun Affairs, which included an interview with Lew Mon-hung, an important former supporter of Hong Kong Chief Executive Leung. In the article, Lew accused Leung of lying about illegal structures at his home, and said Leung regarded the pan-democrats, who support democracy in Hong Kong, as “the enemy“.

On May 23 iSun Affairs gave notice that it was suspending publication of its print edition. Chen denied that he had been put under political pressure, but revealed that staff editors and reporters had been pressured, with a number of them being asked to “drink tea” with CCP security forces on a number of occasions. The term is a euphemism for the nonviolent interrogation and intimidation regularly practiced by Chinese security personnel, sometimes over a pot of steaming tea.

Chen indicated that he will restructure the publication for all-digital delivery, and resume publication soon. iSun Affairs was distributed in Taiwan, Macau and Malaysia but banned in China.

A photo of Chen and Xi Jinping together hangs in Chen’s office but he denies any genuine friendship. “I barely know Xi Jinping; we just say ‘hello’ to each other when we meet in press conferences,” Chen said.

In a press conference on June 5 at the Hong Kong Legislative Council Building, Chen did not deny his CCP membership when he was younger, but said he had less involvement as he grew older. “I have personally experienced and I saw for myself, in a violent society, there is no beneficiary, only victims,” he said, according to a transcription of the conference published on China Digital Times.

Chen went on to quote an old Chinese saying: “He who beats gets beaten, he who kills gets killed,” and defended the necessity for freedom of the press and a free civil society.