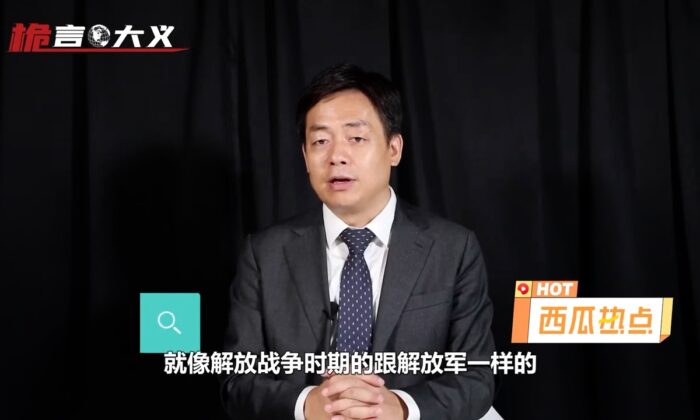 A professor with close ties to the Chinese regime has recently drawn controversy after describing the Taliban as Afghanistan’s own “People’s Liberation Army” (PLA), the official name of the Chinese Communist Party’s (CCP) military forces.

In a video on Aug. 3, Wang Yiwei, an international relations professor at Beijing’s Renmin University of China, calls for people to cast off negative perceptions they may have about the militant group. Wang is also a special fellow at the Center for Contemporary World Studies, a think tank run by a high-ranking Party body, the International Department of the CCP’s Central Committee.

The Taliban “has been demonized by the United States, but is China’s good buddy,” Wang wrote in a social media post attaching the video.

His comments came weeks before the Taliban took control of Afghanistan ahead of a planned U.S. departure from the country, and days after the Chinese regime hosted a delegation of Taliban representatives in Tianjin City in a show of support for the militant group.

In the video, Wang said that just as the PLA defeated China’s Nationalist government, which had years of American support, during the Chinese civil war of the 1940s, the Taliban might decimate the American-backed Afghanistan government.

His 4-minute video on Xigua Video, a YouTube-like platform in China, has since been deleted, though a copy with English subtitles is available on YouTube. The professor’s channel has 710,000 followers.

Wang’s remarks sparked heated discussion on the Chinese internet. Some netizens were indignant that Wang would liken the militant group to the PLA, a large modernized military that surpasses the Taliban’s forces. Others thought that the professor’s remarks aptly, although perhaps inadvertently, reflected the shared violent nature of the PLA and the Taliban.

Srikanth Kondapalli, professor of Chinese studies at the Jawaharlal Nehru University in New Delhi, also noted the similarities between the PLA and the Taliban, saying that “both are ideological and both are militarized.”

Both groups subscribe to the idea that “political power grows out of a barrel of a gun,” a phrase coined by the CCP’s first leader Mao Zedong, Kondapalli told The Epoch Times. Meanwhile, both have an ideological agenda: the PLA’s goal is to prop up communism, while the Taliban seeks an Islamic emirate.

In his video, Wang also called on his audience to “abandon the so-called ‘violence,’ ‘terrorism,’ and other judgments” associated with the Taliban, and understand the group from its Islamic doctrines and tribal traditions. “We need to abandon the demonization by some novels, American movies, or public opinion,” Wang added.

He concluded his video with: “They [The Taliban] know very well that China is a mighty country. Therefore, if they want to control the situation, they must cooperate with China.”

Wang’s remarks are in line with the Chinese regime’s propaganda narrative since the Taliban’s takeover, which has focused on praising the militant group, while castigating the United States over how it handled its withdrawal from Afghanistan.

The CCP’s propaganda campaigns, however, have met with some resistance domestically. Last week, the CCP’s official mouthpiece People’s Daily retracted a video explaining the militant group’s history after drawing a backlash from netizens complaining that it whitewashed the Taliban’s violent history. The video omitted any reference to the group’s links to terrorism, violent past, or repression of women.

Wang is known domestically as a staunch supporter of the CCP. Wang has given many interviews to Chinese state-owned media outlets and conducted speeches at state-sponsored forums promoting the Belt and Road Initiative (BRI), Beijing’s massive infrastructure investment project aimed at expanding its global influence. He has also published nearly ten books on BRI, including three English ones.

The CCP’s positive portrayal of the Taliban is linked to its economic interests in Afghanistan, Michael Yon, a war correspondent who lived in Afghanistan between 2008 and 2011, told The Epoch Times.

The Chinese regime wants the BRI and minerals, such as lithium, in Afghanistan, therefore it needs to whitewash the Taliban to justify its foreign policies, said Yon.

“The CCP comes in and only deals with a few power brokers. They [the CCP] pay them off, and then they get all of our resources and our land. So the local people are shut out,” Yon said. “That’s the only way they’re going to be able to deal in Afghanistan as well.”