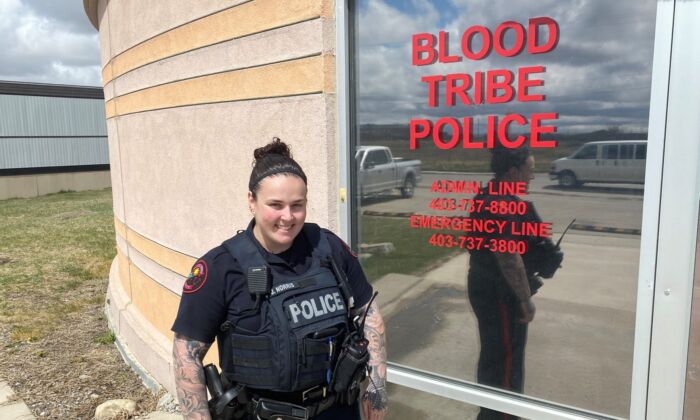 Const. Jennaye Norris of the Blood Tribe Police poses in Standoff, Alta., on May 9, 2022. (The Canadian Press/Bill Graveland)
Canada

It took a few years on the job for Const. Jennaye Norris to realize the Blood Tribe in southern Alberta has a human trafficking problem.

Norris, 29, has been with the Blood Tribe Police Service for almost nine years. The sprawling First Nation, also known as Kainai Nation, is the largest in size in Canada.

Located about 200 kilometres south of Calgary, it’s home to nearly 13,000 band members who identify as Blackfoot.

Norris said a few years ago while working drug cases she learned about girls and women from the reserve being forced into the sex trade.

“People were starting to give me human trafficking intelligence—we know it’s happening,” Norris said in an interview.

She found out that people from outside the reserve were travelling there to sell drugs, then taking girls and women into nearby Lethbridge and trafficking them. Other times, women were meeting men at bars in cities across the province and beyond.

The men became their “boyfriends,” Norris said. But the women were “actually getting trafficked through the main corridors of Alberta, which is Calgary, Red Deer, Edmonton and then even over to Vancouver.”

Norris pitched to the police service the idea of creating a unit to combat human trafficking on the reserve. It was rejected at first but was recently approved by a new police chief.

Norris is now the coordinator, and one and only member, of the force’s Project Kokomi-Kisomm Aakii, or Project Moon Woman. Its aim is to investigate human trafficking cases while raising awareness and training front-line officers.

“Indigenous women are more vulnerable to get trafficked,” said Norris. “They think the men can give them a better life than what they have and then kind of lure them in that way.”

It was important for the project to have a Blackfoot name, she added, so people will feel comfortable helping with the investigations.

“We’ve been told people from the reserve who have been trafficked just don’t feel comfortable going to city police services. It’s from the past mistrust of the police.”

Norris, who is from Medicine Hat, isn’t Indigenous. But she said as a woman she hopes victims will feel they can talk with her.

So far, Norris said, there haven’t been any human trafficking charges laid on the reserve.

“The victims in these crimes sometimes don’t even believe they’re victims,” Moore said.

“Some of them come from very troubled backgrounds, from living arrangements, and where they’re going in their minds is sometimes better than where they came from.

“So how do you tell that person who feels better about where they currently are that they’re being victimized, human trafficked or exploited? It’s a tough sell.”

Moore said for those with troubled backgrounds, the trafficker can appear to be heroic.

“Somebody slides in as kind of the Prince Charming, and says, ‘Hey, come hang out with me. I’ll treat you well and buy you some stuff.’ And they treat them very well … and then all of a sudden it’s, ‘Hey, all of this isn’t for free.'”

“A lot of these people come from very marginalized communities. The number of Indigenous folks across the country is four to seven percent of the population, and they make up about 52 percent of the people being exploited or trafficked.”

On the Stoney Nakoda First Nation west of Calgary, Myrna Teegee said there needs to be more education for young people so they are aware of the risks.

“It’s horrendous and it’s tragic … I don’t think people understand that it needs to be put out into the schools and to let people know before they get out into the world,” said Teegee, a social worker with the Mini Thni Crisis Support Team.

She said it can be a difficult issue to discuss.

“I think most are afraid to speak out because it’s a hush, hush topic.”

Sgt. Andrea Scott with the Winnipeg police said reports of human trafficking there have been on the rise in recent years, but that might be because the public is more aware of the crime.

“Our counter exploitation unit uses a similar approach as the Blood reserve in terms of education,” Scott said.

“Our officers speak at the Salvation Army, Court Diversion Programs for offenders as well as offering education to the hospitality and hotel industry in the city.”

Scott agreed getting victims to come forward can be challenging.

“The trauma victims experience can prove painful to revisit continually through the investigation and court process,” she said.