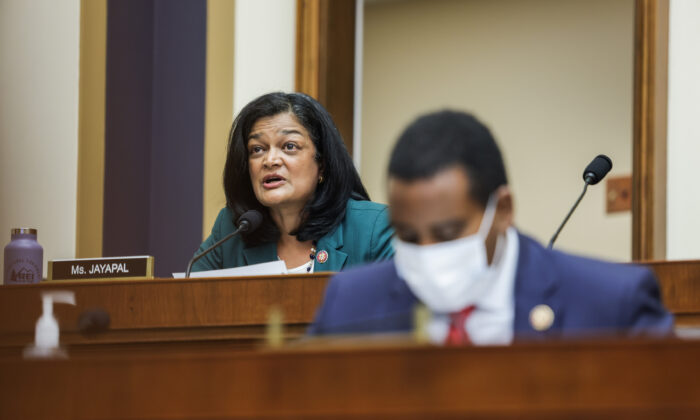 Progressive Lawmakers on Budget Bill: It’s Not About the Cost, It’s About Our Priorities

Progressive lawmakers in the Democratic Party say it’s not the cost of the current budget reconciliation package that is their concern, but rather making sure all their social programs are fully funded.

Congressional Progressive Caucus (CPC) Chairwoman Rep. Pramila Jayapal (D-Wash.) and progressive Sen. Elizabeth Warren (D-Mass.) both recently told news outlets that while funding for key social programs must be included in the budget reconciliation for their caucus to vote in favor of the mammoth $3.5 trillion package, they may be open to a shorter funding cycle to meet conservatives and moderates in their party halfway.

“What we’re thinking about is if we have to trim a little—and I’m saying a little—then what we would like to do is have our priorities represented, and those are child care—or really, the care economy, they are—it is Medicare expansion, it is immigration, it is housing, and climate change. Those five priorities [are what] we need to include, but perhaps for a shorter number of years,” Jayapal told MSNBC last week.

Jayapal said that the proposal is fully paid for by tax increases on wealthy individuals and big corporations and that the funding of the social programs won’t add to the federal deficit.

The CPC, a bloc of nearly 100 House members, said it won’t vote for a smaller bipartisan infrastructure bill without a vote on the $3.5 trillion budget reconciliation, which includes many social programs and climate change provisions.

A few weeks prior to Jayapal’s comments, Warren told a reporter with 12 News at the University of Massachusetts–Dartmouth in late September that she isn’t concerned with the cost of the budget bill but is more focused on making the investments in child care and home care programs.

“We need to think about the things from the ground up that we need to invest in, not just our top-line dollar figure, but what’s it going to take? You know, we wouldn’t need a huge reconciliation package if we’d been making these investments all along,” Warren said.

“We need to make an investment in child care,” as well as elder home care, she said, but there are also other programs she is not willing to compromise on.

“We need to expand Medicare, vision, dental, hearing, lower the age to 62. That’s all on the table. And then the really big one in terms of dollars and the future—we got to fight back against the climate crisis.”

Unlike Jayapal, Warren didn’t say it was fully paid for but instead listed her ideas for how to collect the revenue to pay for the trillions of dollars in social programs.

Warren said she wants to budget a bill to include a wealth tax on people who make more than $50 million a year and a tax increase on the profits of large corporations. She also emphasized increasing the size of the IRS so the agency can go after the wealthy.

“That third one is that we need to enforce the tax laws. Now, right now, there’s pretty strong enforcement against people who live paycheck for living because it all gets reported to the government, right? But the very, very wealthy increasingly seem to think that paying taxes is optional,” Warren said.

According to the Committee for a Responsible Federal Budget, the Democrats’ budget reconciliation bill includes $80 billion of funding to increase staffing at the IRS.

Self-described Democratic socialist Alexandria Ocasio-Cortez (D-N.Y.) told CBS’s “Face the Nation” on Oct. 3 that she isn’t focused on the cost but on “substantive programs” when thinking about how large the budget should be.

“The reason why this conversation shouldn’t be about numbers, but it should be about what substantive programs are willing to be excluded,” she said.

“And so, that’s what we really need to talk about—the substance of this. The budget bill that House progressives are trying to fight for—Biden’s Build Back Better agenda—includes universal pre-K, free community college, expansion of Medicare, we’re fighting for expansion of Medicaid. And these are the things that we are saying, in addition to the very real climate threat that we have.

“I think that one of the ideas that are out there is, fully fund what we can fully fund, but maybe instead of doing it for 10 years, you fully fund it for five years.”

Senate consideration of the smaller bipartisan infrastructure bill has been halted until an agreement can be reached among progressive and moderate Democrats on the provisions and cost of the larger reconciliation package.

Because Democrats hold slim majorities in both legislative chambers, even a single senator who opposes a bill can shut it down. Currently, a third of the Senate GOP supports the smaller infrastructure bill but all oppose the $3.5 trillion reconciliation package.

President Joe Biden is siding with the progressives, putting pressure on House Speaker Nancy Pelosi (D-Calif.) and moderate Democrats to continue to link the two bills and to push through the reconciliation package before voting on infrastructure.