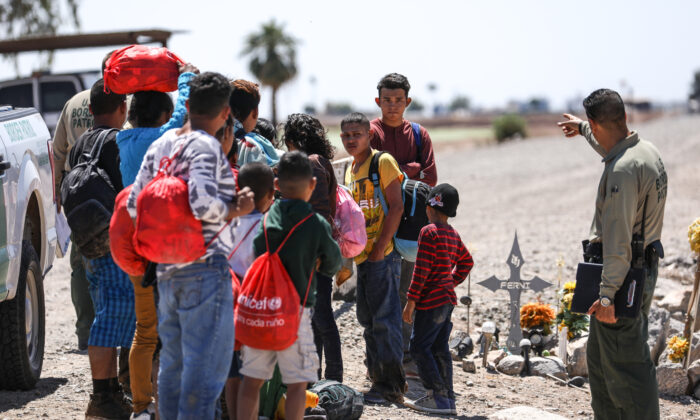 Program That Releases Illegal Immigrants into US Being Used More: Watchdog Report

The U.S. government is increasingly utilizing a program that releases illegal immigrants into the U.S. interior instead of keeping them detained until their court hearings, according to a new watchdog report.

The Immigration and Customs Enforcement (ICE) program is formally known as Alternatives to Detention and colloquially known as “catch and release.”

While federal law requires the U.S. government to detain illegal immigrants until they have a court hearing, the government says it does not have the capacity to do so, and has since 2004 been releasing a portion of those captured at the border under the program.

In 2015, ICE enrolled 53,000 illegal immigrants in the program, which uses monitoring tools like GPS ankle bracelets. By 2020, that figure jumped to 111,000, according to a new report (pdf) from the U.S. Government Accountability Office (GAO) that analyzed data from contractors paid to help to run the program.

During that time, about a quarter of the illegal aliens placed in the program absconded, or fled the address at which they were staying “and could not be located,” the GAO found, including 33 percent in fiscal year 2020, which stretched across the Trump and Biden administrations.

The largest number of the illegal immigrants who were “unenrolled” from the program before they had a court hearing were allowed to do so by government officials on the condition they submit to other monitoring conditions outside of the Alternatives to Detention (ATD).

Most illegal immigrants placed in the program from 2015 through 2020 were from Central America.

The GAO also found that its 2014 recommendations to make sure guidance on how to run the program was being followed have not been fully implemented, that some contractors were not reviewed to make sure they met standards, and that ICE does not have a requirement that contractors present illegal immigrants with legal presentations.

Preston Huennekens, government relations manager with the Federation for Immigration Reform, told The Epoch Times in an email that the report shows the alternatives to detention “simply do not work.”

“More than 40 percent of those enrolled in ATD were failures, including 33 percent who outright absconded. Only 8 percent of cases concluded with the alien leaving the country or winning their asylum claim. ATD simply does not work, and exists only because of our country’s continued refusal to follow existing law and the requirements to detain illegal aliens,” he said.

The GAO concluded in its report that “ICE has taken steps to implement program policies, collect program data, and oversee the contract” but that “further actions could improve its implementation, assessment, and oversight of the program and its $2.2 billion contract.”

ICE declined to comment beyond what was stated in the report.

According to the GAO, ICE’s parent agency, the Department of Homeland Security, concurred with all 10 recommendations and said most of the recommended actions are either underway, or there are plans to undertake them.