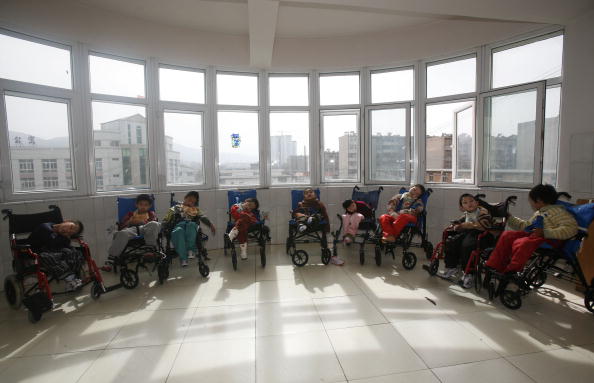 Children who suffer from cerebral palsy wait for an extra meal after noon break at the Xining Orphan and Disabled Children Welfare Center on Feb. 24, 2009 in Xining of Qinghai Province, China. (Photo by China Photos/Getty Images)
China

Profit Comes With Selling Chinese Orphans, but Questions Too

Trafficking babies is good business in China: Infants can be sold to overseas buyers for as much as $22,000, and the authorities don’t seem to mind. In some cases, officials even confiscate children born outside of the one-child policy and sell them to foreigners.

One of the large organizations running an adoption service for foreigners, the International Children’s Relief Fund (ICRF), is run by the same people who are in charge of the NGO called Children’s Hope Relief Foundation (CHRF), which is supposed to take care of orphans, children with congenital diseases, and abandoned children, according to a recent investigation by Times Weekly, a Chinese newspaper.

The CHRF has been operational in China since 1992. It’s not clear when they began mixing their roles. According to Times Weekly, CHRF takes in children with congenital and complicated illnesses for treatment, persuades the parents to give up guardianship, and then puts the babies up for adoption under ICRF. Foreigners sweep in to buy the babies.

Times Weekly reports that ICRF’s agent in China is Zhang Wen, who is also in charge of CHRF. He earns more than one million yuan (approximately US$157,520) per year for his adoption services, the Weekly reports. Under Chinese law, CHRF can’t be involved in adoption activities, but Zhang has become adept at doing business with both hats.

The first foreign adoption of a Chinese baby was approved in 1985, and in 1992 the law was formalized. China has become a major provider of adoptees to the West since. By the end of 2011 there have been 120,000 Chinese children adopted by families abroad, of which more than 4,000 were supplied by the ICRF.

According to the official ICRF website (in Chinese; the English website is no longer operational), the cost of adopting a Chinese child in for U.S. citizens is about 175,000 yuan (approximately US$27,564). This includes US$21,780 in fees, including an application fee, a fingerprint fee, a home study fee, a management fee, and others, along with another payment of $5,513.9.

For all that, it is still cheaper for Americans to adopt a child in China than in the U.S.

American families adopted 3,401 children from China in 2010, or a quarter of total adoptions, according to official statistics.

The two main sources of children are those congenital illnesses, whose parents cannot afford the medical treatment and hand over guardianship, and babies who are abandoned.

Under the current adoption law in China, if a lost baby is not claimed within 60 days of the Ministry of Civil Affairs making an announcement, it will be treated as abandoned.

The China Center of Adoption Affairs was established in 1996 under the Ministry of Civil Affairs. This makes the Ministry responsible for registration of abandoned children, their adoption by foreigners, and the loopholes and irregularities in the system as well.

Times Weekly reported in July 2009 that the government of Zhenyuan County, Guizhou Province, allegedly confiscated from parents female babies that were born in violation of the one-child policy, and forcefully sent them to orphanages.

Then they sold the babies for US$3,000 each to foreigners. Nearly 80 infants in Zhenyuan County have been adopted by American and European families in this manner since 2001.

Beijing News reported on June 8 that some welfare institutions in Fujian and Guangdong Provinces also use the one child policy to procure infants for adoption.