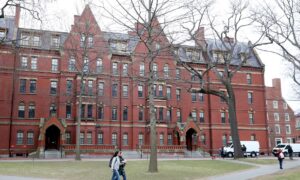 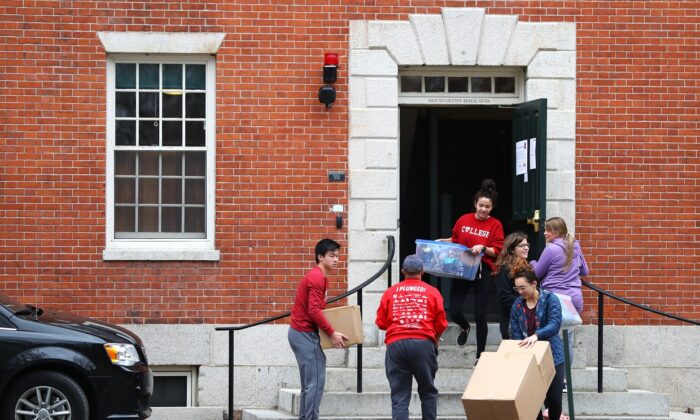 Students move out of dorm rooms on Harvard Yard on the campus of Harvard University in Cambridge, Mass. on March 12, 2020. Due to the risk from the CCP virus, all classes will be moved online for the rest of the spring semester. (Maddie Meyer/Getty Images)
US News

As the pandemic caused by the Chinese Communist Party (CCP) forces college and university lectures online, left-wing academics in the United States are apparently nervous about the possibility that what they are teaching may be publicized by “right wing sites,” Campus Reform reports.

Conservatives and others have long criticized the nation’s institutions of higher learning for what they say is academia’s radical bent and have tried to bring accountability to the field. But those efforts to make what professors say in the lecture halls public have been met with often fierce resistance by schools that invoke privacy rights and even copyright laws to keep lectures offline.

Left-wing academics have been sharply critical of websites such as Turning Point USA’s Professor Watchlist, which aggregates media reports on individual professors, and Canary Mission, which tracks professors and students it deems anti-Semitic.

Now, some professors are using social media to share tips on how to cap the number of people able to view their lectures over the internet to keep unwanted viewers away, according to the report. While a selection of tweets by academics is hardly a scientific study, it may offer a window into what academics are thinking as social relations change in an era of enforced isolation and sudden change.

In recent days, Texas Christian University associate professor of political science Emily Farris wrote on Twitter, “If you are recording a lecture on anything controversial, be prepared for right wing sites to ask students to share it.” The settings on her Twitter account were subsequently changed to limit public access to her page.

Graziano wrote, “Fear nothing. But you may want to create an upsidedown [version] of [the] video. That’s how fascists should end up,” possibly a reference to Italian fascist dictator Benito Mussolini, who was executed and whose body was then hung upside down.

Conservatives have long complained that radical academics frequently denounce their critics as fascists, regardless of their actual views.

Christen Rexing, an assistant professor of public health at LaSalle University in Philadelphia, Penn., responded to that tweet, asking why others might find topics such as “gun safety, women’s health, elections, etc.” to be “controversial,” because they are “evidence-based.”

“Seems like the flood gates could open,” Rexing added.

University of North Carolina political science graduate student Stephanie Shady wrote on Twitter, “Annnnd I just realized that the second half of my course focuses on public opinion towards and politicization of immigration. This will be interesting.”

A user going by the Twitter name Prof CWO responded on the microblogging site, “Sigh, I teach about white nationalism and this has been my biggest fear since we began transitioning to online instruction.”

Columbia University political science professor Jeffrey Lax noted on Twitter that he has been “thinking about” how students might record classes.

Rachel Michelle Gunter, who identifies herself as a history professor at an unidentified school in Texas, wrote, “I’m taking steps to limit this but nothing is foolproof.”

Remy Levin, a doctoral candidate in UC San Diego’s economics department, suggested a course of action in a tweet.

“Wasn’t that already a possibility with recording lectures for disability accommodations? Profs could put in place similar access limits to videos for online lectures—only share in the case of a reasonable accommodation.”

The Epoch Times refers to the novel coronavirus, which causes the disease COVID-19, as the CCP virus because the Chinese Communist Party’s coverup and mismanagement allowed it to spread throughout China and create a global pandemic.