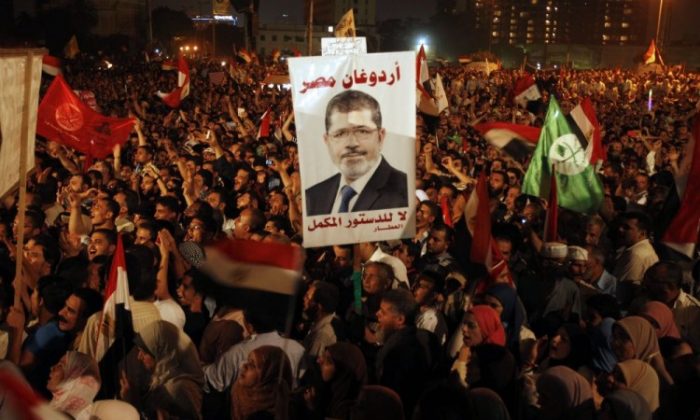 “Social Change and the Global Middle East,” a Jan. 20 webinar sponsored by the University of Pennsylvania’s Andrea Mitchell Center for the Study of Democracy, made clear that the discredited talking points that ensnared the West in the “Arab Spring” uprisings continue to proliferate at elite academic institutions.

Participants failed to note either the intimate connection between non-violent political Islamic groups and terrorists during and following the “Arab Spring,” or the Islamist goal of reviving the Caliphate. Such disinformation—standard fare in Middle East studies—gives those entering government service a false view of who Islamists are and what they’re about, which harms America’s relations with Muslim nations, whose governments and people know better. It also results in what many in those countries say is an elitism formed out of ignorance instead of knowledge. This has led U.S. policymakers to back terrorists and to turn a blind eye to non-violent political movements’ intimate links to terror.

All defined the Muslim Brotherhood and similar movements in Western terms using discredited tropes, including that the “Arab Spring” was driven by a desire for better morals; all Muslims who engage in political activity of any kind are Islamist; and political Islam is reconcilable with an open multi-party, pluralistic democratic system.

“If you think back to the discourse about the Middle East on the eve of the Arab Spring, that season of democratic ferment that erupted in 2011 and ended or was suspended, depending on how optimistic you are, in around 2013,” Masoud said, “… the concern that people would raise is that if these regimes fall, they’re going to be replaced by so-called Islamist political parties.”

Consequently, worries abounded that they would follow the Iranian model of Islamic theocracy, which Masoud dismissed. He cited the Muslim Brotherhood, founded by Hassan al-Banna in Egypt in 1928, which he described as a “pietist, conservative political party,” and the Moroccan Brotherhood party, the Party of Justice and Development, as examples.

Morocco’s system, in which the king alone has the right to speak on religious matters, constrained Islamist parties, Salime said.

Masoud reminded participants of then-Assistant Secretary of State Edward Djerejian’s warning following the election of an Islamist party in Algeria that Islamist electoral success would result in “one person, one vote, one time. … We are in such a state of polarization in the Arab world today that we can look at similar facts and have completely different interpretations of them.”

Yet Islamist parties unconstrained by constitutional norms have validated concerns about their authoritarian inclinations. Egyptian opposition figure Michael Meunier told The Investigative Project on Terrorism in 2016 that the Muslim Brotherhood is adept at hiding its true intent. “They love playing under different umbrellas. They say one thing in English and another in Arabic,” Meunier said. Liberal opposition figures from Libya and Syria told this writer similar things.

In Egypt, the Muslim Brotherhood pursued a policy of imposing theocratic rule and excluding non-Islamists after it came to power in the June 2012 elections under the late President Mohamed Morsi. Morsi awarded himself emergency powers in August 2012 that he later used to crush dissent in late 2012 and in early 2013.

Ties existed between the Libyan Muslim Brotherhood and al-Qaida in Libya during the “Arab Spring” uprising, according to an email from current National Security Adviser Jake Sullivan, at the time an adviser to then-Secretary of State Hillary Clinton.

Masoud acknowledged Turkey’s turn to authoritarianism, calling it the poster child for “autocratic backsliding.” Yet, Masoud argued Turkish authoritarianism has nothing to do with Islamism in light of Turkish President Recep Tayyip Erdoğan’s quip that “democracy is like a train; you get off once you have reached your destination.”

Declaring that Turkey’s authoritarianism has nothing to do with its Islamism is disinformation. Masoud argued that all Muslim parties using religion in their politics are Islamist, not just those connected with the Muslim Brotherhood or Salafist movements. Salime tried unconvincingly to bolster him by claiming that “political Islam is an organized political movement by people who believe that bringing certain morality, certain religious ethics into political life will create a change.”

A more accurate definition of groups like the Muslim Brotherhood and many Salafi movements is “Caliphist.” All such groups aim to recover the lost Caliphate but disagree on how to achieve their goals.

Brotherhood members are not the only Islamists desiring a Caliphate. Safwat Hegazy, an Egyptian Salafi preacher, expressed hope that Morsi’s election would usher in a new Caliphate in 2012. ISIS and al-Qaida also aim to restore the Caliphate.

Masoud, Salime, and the Middle East studies culture that created and supports them and their peers threaten America’s national security. Willfully blind to Islamism’s true nature, they mal-educate their students, rendering them incapable of diagnosing correctly Islamist threats to the United States and the West. The Obama administration’s bungled handling of the “Arab Spring,” and President Joe Biden’s disastrous strengthening of the Taliban amid its abrupt pullout from Afghanistan, illustrate the consequences of our policy elite’s incapacity for analyzing rigorously or implementing competently strategies that strengthen the United States rather than undermine it.

This article was written in conjunction with Campus Watch, a project of the Middle East Forum.