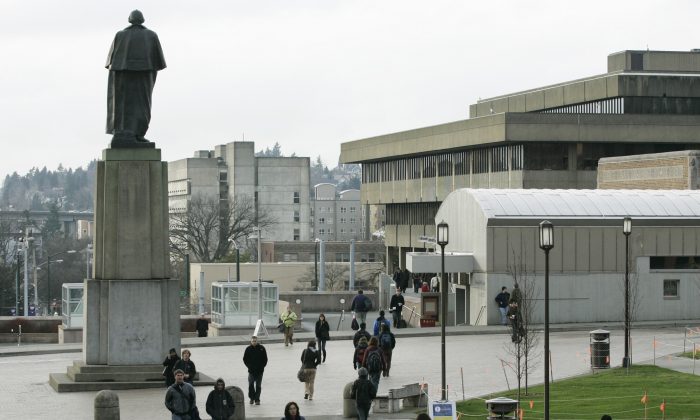 Students walk near a statue of George Washington on campus at the University of Washington in Seattle, in this file photo. (Ted S. Warren/AP Photo)
Education & Family News

A professor has filed a First Amendment lawsuit against the University of Washington (UW), which censored him for disagreeing with the idea that the university campus sits on “occupied land” belonging to a native tribe.

Located in Seattle, UW is one of the many U.S. colleges and universities that promote “land acknowledgment” statements that recognize indigenous peoples as the original owners of the land upon which their campuses are built.

On a list of “best practices,” the public university’s computer science department recommends that professors include such a statement in their syllabi “to acknowledge that our campus sits on occupied land” that was once owned by the Coast Salish, a collective term for indigenous tribes living in British Columbia, Washington, and Oregon.

Stuart Reges, a computer science professor at UW, rejects the idea. “I acknowledge that by the labor theory of property the Coast Salish people can claim historical ownership of almost none of the land currently occupied by the University of Washington,” Reges wrote in the syllabus for his introductory programming course.

The labor theory of property is most prominently associated with 17th-century English philosopher John Locke, who argued that property rights should go to those who make productive use of the land, rather than those who allow the land to go to waste uselessly in their possession.

“I have been unable to find much evidence that Native Americans ever made productive use of the 350 acres on which the main campus of the University of Washington now stands,” Reges explained in an article in online magazine Quillette.

After several students complained, Magdalena Balzinska, director of the computer science department, ordered Reges to take down his own version of the land acknowledgment.

“I ask that you remove the land acknowledgement statement from your syllabus immediately. It is offensive and it creates a toxic environment in your course, which is a required course in your major,” Balzinska wrote in a Jan. 4 email. Reges replied that he wouldn’t remove it unless all other faculty in the school also removed theirs.

“[Administration] said at a faculty meeting that a syllabus is not a place to include a political statement,” Reges said, reported student newspaper The Daily. “So that’s why they say that what I did is inappropriate. But then how is it appropriate to include this other version of the land acknowledgement? Why is it OK to include this version, but not mine? That’s the crux of the First Amendment issue here.”

Balazinska eventually edited the passage out of Reges’ syllabus posted on the school’s website. The university also created a “shadow” section of his programming course, which featured pre-recorded instructions by a different professor, and invited students to switch to that new section to avoid exposure to “offensive” views.

In addition, the University opened a disciplinary investigation into Reges, which, according to the lawsuit, could potentially result in further punishment or even termination of his employment because of the views he expressed in his dissenting statement.

In his complaint filed Wednesday at a U.S. district court in Seattle, Reges argued that UW is retaliating against him for protected academic speech in violation of his First Amendment right.

“The University has taken these actions despite settled law that holds public university faculty have a First Amendment right to speak on matters of public concern in their teaching and research,” the complaint reads. “The value and utility of land acknowledgement statements exemplifies such a matter of public debate.”

“If UW encourages professors to take a political stance on their syllabi, it cannot punish those professors who diverge from the school’s pre-approved stance,” said FIRE attorney Katlyn Patton. “At UW, the message to faculty is clear: Toe the party line or say goodbye to your students.”

In a statement, a UW spokesperson said the university is “reviewing that complaint,” insisting that the university didn’t do anything wrong in its handling of the situation.

“The university continues to assert that it hasn’t violated Stuart Reges’ First Amendment rights and we look forward to making that case in court,” the spokesperson said.