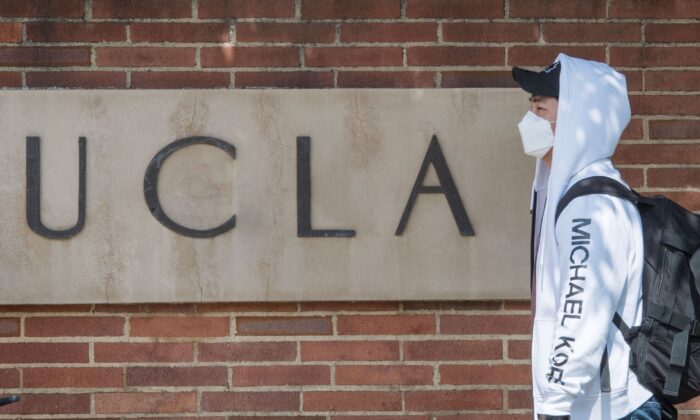 A student wears a face mask on the campus of the UCLA college in Westwood, Calif. on March 6, 2020. (Mark Ralston/AFP via Getty Images)
US News

A professor who was suspended for declining a push to give black students easier exams has sued his school, alleging a breach of contract and other violations.

Gordon Klein, a professor at the University of California–Los Angeles (UCLA), was asked by a group of non-black students last year to grade their black classmates more leniently. They wanted him to give them a “no-harm” final exam that “will only benefit students’ grades if taken,” they wrote in an email.

The group said the disparate treatment should be given to black classmates because they “are directly facing the consequences of state-sanctioned violence and graphic content on social media that transcends from Minneapolis to our very own communities in our hometowns and in Westwood.” The email appeared to be referencing the police killing of George Floyd.

Klein refused the request, prompting an outcry from people who organized a campaign that alleged he was racist. That led to UCLA’s Anderson School of Management, where he teaches, to discipline him. He was suspended, banned from campus, and others were hired to teach his classes.

Antonio Bernardo, the dean of the school, disparaged Klein to alumni and the general public, according to the lawsuit, which was filed in the California Superior Court in Los Angeles County.

Officials took issue with an email Klein wrote in response to the group of students. In it, he questioned how he should treat students of mixed heritage and whether the group knew any black students.

“It is deeply disturbing to learn of this email, which we are investigating,” the school wrote on social media.

While the university blocked the school from firing Klein and he has since resumed teaching, he filed a lawsuit because he doesn’t want to see another professor treated in the same way.

“They have had a pattern of infringing on people’s academic freedom and engaging in cancel culture. That shouldn’t happen to anyone, and I’m standing up against it,” Klein told The Epoch Times.

In some cases, universities “have lost sight that their principal mission is to educate students, as opposed to racially profiling and segregating students or treating them differently based on their group identity,” he said.

The suit alleges violations of the California Constitution and California Labor Code, including the right to privacy, protection against retaliatory discrimination, and an employer’s duty to remain politically neutral. It also asks for damages.

“Due to confidentiality and privacy laws and concerns, we are unable to comment on this matter at this time,” a UCLA spokesperson told The Epoch Times in an email. “However, we can share that the university has general procedures and principles that uphold freedom of expression and freedom of intellectual inquiry while also facilitating a learning, working, and living environment that is free from discrimination, harassment, or retaliation.