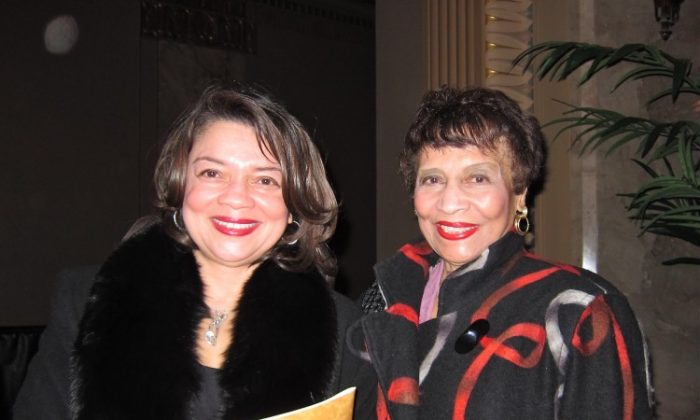 Professor of Music: Shen Yun ‘It was so beautiful’

ST. LOUIS—”I thought it was fantastic, absolutely beautiful. Like nothing I’ve ever seen before, and I’d like to come back again next year,” said Dr. Rosalyn Miles, a physician of Neurology, after watching Shen Yun Performing Arts grace the stage at the Peabody Opera House, on Saturday, Feb. 18.

The New York-based classical Chinese dance and music company, Shen Yun, criss-crosses the globe with one mission: to revive 5,000 years of divinely inspired Chinese culture, according to the company’s website.

Dr. Rosalyn Miles felt that the performance opened her up to a different culture. “It really opened my eyes, especially through the thousands of years of history—very, very different, very interesting, especially now when the world is changing.

“I think we’ve become more sensitive to what’s going on in other countries. Before, I think, we’ve been a little bit more isolated and now we’re seeing through the eyes of others, and I think that’s fantastic.”

Dr. Miles was accompanied to the show by her mother, Dr. Rosalyn England-Henry, a professor of music. She is the Director of Music at the Harris-Stowe State University and also conducts The Concert Choral at the university.

“I’m excited and happy. It was so beautiful tonight, it was wonderful,” Dr. England-Henry said.

“Oh, my goodness, they were wonderful, “I enjoyed every last one of them,” she said, referring to the Shen Yun’s soloists.

“I was classically trained and that’s the kind of music I thoroughly appreciate, and I can listen to it forever,” she explained.

“Their voices were excellent, and the little, young lady who played the piano, what a talent, she has quite a talent. … She is very gifted and talented.”

Elaborating, she explained that the pianist “followed the singer to the letter. The singers were right in tune and on pitch and on time and she played her role, so that they had no problems. There was no problem with them working together. They were absolutely coordinated.”

Shen Yun tours with a full orchestra, as well, composed of both Western and Chinese instruments.


“The orchestra was wonderful. The combination of instruments, and you could hear them all, it was just great, beautiful, so I was tremendously impressed with everything that happened this evening,” she added.

One aspect of the show, the digitally animated backdrops thrilled Dr. England-Henry. Dancers appear to fly up into the skies and heavens as animated figures coordinate exactly with the dancers onstage.

“I wish I knew how they did that,” Dr. England-Henry said. “They could fly into the mountains … that was so unique.

“It was delightful and I wish, I really wish I could see it again,” she shared.

Dr. England-Henry hopes others will see the show: “I wish every student in our university and every other university could see this show. This is quite a learning experience, it opens one’s eyes to all kinds of new avenues, technology, things that we knew years ago and things that we can learn for the present, and I’d like to see more of this.”

“I will tell my students, absolutely, and I’ll share with them. I have subscriptions to the … symphonies and I share my tickets with them. I want them to be exposed. This kind of exposure would be so unique for them because they also have to create music, they have to sing, they have to listen, they have to learn, they have to hear and when they look at what they see, visually and put it together with listening, this is quite a combination that gives them ideas as how to make progress in the music area.

“The more times they’re exposed to this the better,” said Dr. England-Henry.

As she sat there, she was thinking: “My kids should see this so that they can know how to do this. … We teach them the elements of music: where is the melody? where is the harmony? where is the rhythm? put them all together, tell me about this. What is the form of these pieces? Because basically even though it’s a different [culture]—Chinese music—all of the same elements are there, there is no difference. I’m excited.”

In fact, Dr. England-Henry is so excited she may borrow some ideas—for professional purposes. “As a professional, it gave me so many other ideas that I can use for my choir. We have one [concert] coming up on the 13th.”