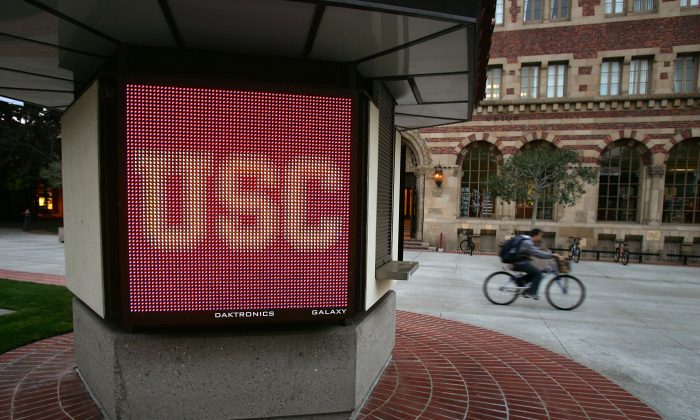 The University of Southern California (USC) campus is seen in Los Angeles on March 6, 2007. (David McNew/Getty Images)
Crime and Incidents

LOS ANGELES—A graduate student arrested on suspicion of stabbing to death the professor who oversaw his work at the University of Southern California was being held on $1 million bail Saturday as their shocked colleagues began processing the news.

David Jonathan Brown, a 28-year-old brain and cognitive science student, was arrested in the Friday afternoon attack in the heart of the Los Angeles campus. His mentor, Bosco Tjan, was pronounced dead at the scene.

Brown was among just five students who worked in Tjan’s lab that studied vision loss. In a biography page about the students, Brown’s is the only one without a detailed description or photograph.

Tjan was killed inside the Seeley G. Mudd building where he runs the lab. Brown was arrested without incident almost immediately afterward, police said, adding that the killing was targeted.

Kilho Shin, also a brain and cognitive science graduate student who worked in Tjan’s lab, said Saturday that Brown was a quiet student and seemed satisfied with Tjan’s oversight.

“I don’t know what exactly happened between them. But as far as I know, Bosco likes David’s work and David also seemed to be satisfied with his supervising,” Shin said. “Their conversation on research was healthy and constructive.”

Shin said he was shocked by Tjan’s killing, adding that the professor was humorous, kind and warm, and a genius in his area of study.

“It is s a big loss not only to me but also in this field and society. He has served his lab members as his family members, not just graduate students, including David Brown,” he said.

Chris Purington, project manager at Tjan’s lab, said Friday that he never heard of anyone having a problem with Tjan, a married father of one son listed in public records as 50 years old.

“He was somebody who really cared about people. I know he cared about me,” Purington said through tears. “He mentored people, and he looked out for them. He spent a lot of time thinking about what it means to be a mentor and guide people.”

He said the professor gave him a job both after he graduated from USC and after graduate school at the University of California-Berkeley.

Purington, who traveled with Tjan for various science conferences, said that everyone knew and loved the professor.

“People talk about scientists as very cold or robotic. Bosco is a guy that he could talk to anybody about anything,” he said. “He couldn’t move through a room without being sidetracked in all these conversations.

“He just had this energy about him. Kinetic might be the word. He had a huge impact on my life.”

Purington, who also oversaw Brown at the lab, said Saturday that he was not ready to speak about the student.

David Clewett said he was a student in Tjan’s brain-imaging course and met with him about how to analyze his data.

“He was a brilliant scientist and an exceptional person who was always kind, generous with his time, and genuinely cared about his students and colleagues,” Clewett said. “This is a such tragic and shocking loss.”

Student Kingson Man said Tjan “was a model of generosity and caring to his students.”

“He was the one we all went to with the really hard, really technical questions,” Man said. “He was a great scientist and role model.”

“As the Trojan family mourns Professor Tjan’s untimely passing, we will keep his family in our thoughts,” Nikias said.

Tjan joined USC in 2001, taught in the Dornsife College of Letters, Arts and Sciences, and served as co-director of the Dornsife Cognitive Neuroimaging Center, Nikias said.

The stabbing comes six months after a well-loved professor was fatally shot on the UCLA campus. Authorities believe former student Mainak Sarkar killed his estranged wife in a Minneapolis suburb before driving across the country to Los Angeles and killing engineering professor William Klug on June 1. Klug had helped Sarkar earn his engineering Ph.D. in 2013.

USC has 44,000 students enrolled, including more than 10,000 international students. A highly competitive school, it enrolled only about 16 percent of the more than 54,000 people who applied for its freshman class this year.