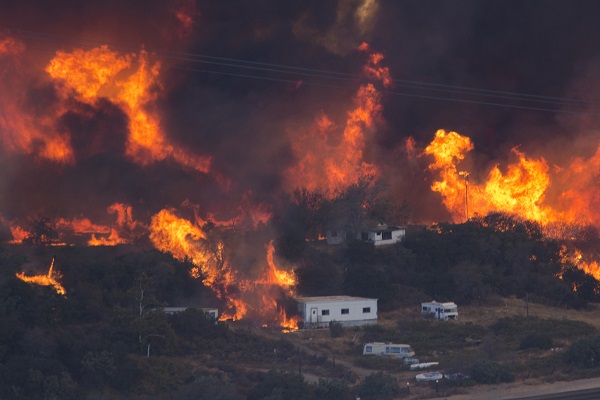 Flames sweep through a rural community at the Blue Cut Fire near Wrightwood, Calif., on Aug. 17, 2016. (David McNew/Getty Images)
US News

Californians’ insistence on owning their own homes is “reinforcing” the state’s rampant wildfires, according to a professor whose recent column has sparked controversy.

Americans’ “aspirations of home ownership” and “belief in the importance of private property” are “reinforcing” the conditions that lead to wildfires, Kian Goh, assistant professor of urban planning at UCLA Luskin School of Public Affairs, wrote Dec. 23, 2019, in a column at the left-wing magazine The Nation.

Goh’s claims run counter to those expressed by President Donald Trump, who has offered a different explanation for the severity of wildfires in the Golden State.

“There is no reason for these massive, deadly and costly forest fires in California except that forest management is so poor,” President Donald Trump wrote on Twitter on Nov. 10, 2018. “Billions of dollars are given each year, with so many lives lost, all because of gross mismanagement of the forests.”

But to Goh, economic freedom and Americans’ quest for self-betterment are the real villains.

“Our ideas about what success, comfort, home, and family should look like are so ingrained, it’s hard for us to see how they could be reinforcing the very conditions that put us at such grave risk,” she writes.

To “engage with these challenges, we need to do more than upgrade the powerlines or stage a public takeover of the utility companies,” she writes, adding, “We need to rethink the ideologies that govern how we plan and build our homes.”

Goh also embraces the unproven man-made global warming theory, arguing there is a “climate emergency” that justifies overthrowing “our ideologies of ownership and property, and toward more collective, healthy, and just cities.”

Goh’s arguments are similar to those expressed by 16-year-old climate activist Greta Thunberg, an Antifa supporter and Time magazine’s “Person of the Year.” Thunberg calls for overhauling “colonial, racist, and patriarchal systems of oppression” to combat climate change.

Goh writes that Americans who want to optimize their lifestyle and own their own homes are part of the problem.

Goh also speaks fondly of the Green New Deal, which critics say is a totalitarian plan to de-industrialize America at an estimated cost of more than $90 trillion, and which has been endorsed by Sen. Bernie Sanders, a Vermont independent now seeking the Democrats’ 2020 presidential nomination. The plan, which calls for massive government spending on public housing, “invokes prior eras of government intervention, lending itself to revitalized thinking about the social value of public goods,” she writes.

“If we can reframe debates about the future of cities beyond rote acceptance of property ownership, it will free up space for us to think about new, more just, and climate-attuned modes of urban living,” she adds.

But Goh acknowledges that getting Americans to abandon “the ideals of the American dream that have been instilled for more than 150 years will be difficult.”

As of press time, Goh hadn’t responded to requests for comment from The Epoch Times.

Critics disagree with Goh’s views about the causes of wildfires in California.

They say that for decades, environmentalists ideologically opposed to economic growth pushed for new federal and state regulations that made it more difficult for California’s forestry industry to operate.

By 2017, employment in the industry in that state fell to half of what it was 20 years before, Chuck DeVore, vice president of national initiatives at the Texas Public Policy Foundation, wrote in Forbes magazine in 2018.

As harvesting permit fees rose and environmental regulations intensified, industry employees left the field and the “combustible fuel load in the forest predictably soared,” according to DeVore. There used to be an orderly burning of wood waste—including brush and smaller trees cleared by thinning efforts—from timber operations, but “[no] longer were forest management professionals clearing brush and thinning trees.”

“What used to be burned safely in power generators is now burned in catastrophic fires,” he wrote.