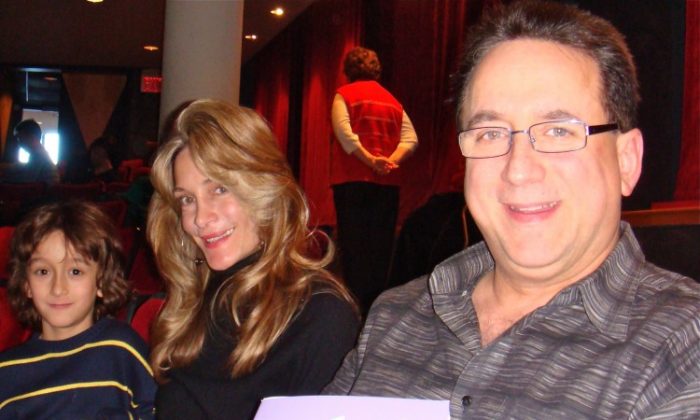 Dan Bodanis, his wife Kelly, and their son were impressed with Shen Yun Performing Arts in Mississauga. (The Epoch Times)
News

“The show is wonderful. The choreography is phenomenal. The sets and the designs and the costumes are spectacular. The positions are excellent. It’s one of the best shows we’ve seen here,” said Mr. Bodanis, who drums with Toronto-based The Dan Bodanis Band.

Mr. Bodanis’s wife, Kelly, was equally impressed. Mrs. Bodanis has a background in dance and is a former Miss Dance Canada.

“I relate to a lot of things that are happening out there and they’re very, very good—and very, very beautiful.”

“They tell the story with their arms, their legs, their movement, and I relate to it very well. I understand what they’re saying through their body.”

“The interplay between technology and the dancers is phenomenal,” said her husband, referring to Shen Yun’s signature animated backdrops.

Mr. Bodanis was also impressed by the orchestra, which blends traditional Western orchestral instruments with Chinese instruments such as the pipa and erhu.

“The orchestra is excellent. Everybody plays very, very well,” he said.

“The conductor, he’s got a great command of the orchestra. But [the musicians] also have a great respect for him in how they listen, how they respond dynamically, how they respond rhythmically, and the interplay between each in terms of their tuning, the intonation, their pitch. It’s flawless. It’s a very, very fine orchestra.”

He added that the cooperation between the orchestra and the dancers was also flawless. “It’s a seamless interplay.”

Shen Yun is known for its colourful costumes, all of which are handmade.

“It’s the best show I’ve ever seen in my life,” said her son.