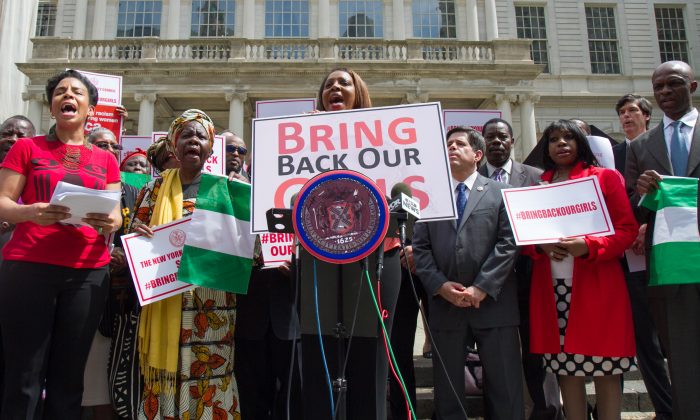 NYC Council Member Letitia James speaks during a rally on the NY city hall steps to bring justice to the Nigerian Islamist rebel group who kidnapped more than 200 school girls in Nigeria. (Benjamin Chasteen/Epoch Times)
US

NEW YORK—In New York City, home to about 20,000 Nigerian immigrants, there has been widespread outcry over the kidnapping of the 286 schoolgirls in the northeastern town of Chibok under the cover of darkness. They have marched and rallied in Bronx and Manhattan several times in the past week. Even bigger events are being planned for later in the month.

After 2-3 weeks of inaction, the international community, including the United States government, have finally caught up with the atrocity and are now condemning it.

On City Hall steps Monday, city leaders, including City Council Speaker Melissa Mark-Viverito and Public Advocate Letitia James, said the kidnappings are part of larger problems in Nigeria that must be addressed. The City Hall rally, like others earlier in the week, included members of the Nigerian community.

“Something led to the abduction of these girls, and that problem has not been solved,” said Janet Fashakin, a Nigerian lawyer who immigrated to the United States in 1993 at a Sunday rally in front of the Nigerian Consulate.

The event was led by U.S. Sen. Charles Schumer, who has urged the State Department to offer rewards and refugee status to people who help in the rescue of the girls. He also proposed that anyone involved in buying or harming the girls be placed on the terrorist watch list. On Saturday, Mayor Bill de Blasio and the Rev. Al Sharpton held a similar event.

Fashakin’s sentiments have been echoed by many people speaking out about the kidnappings and the general state of crisis in Nigeria.

“Something led to the abduction of these girls, and that problem has not been solved.”—Nigerian lawyer Janet Fashakin (Ivan Pentchoukov/Epoch Times)

“We want to get to the roots of our problems, and we want the world to help us,” she said. “We all know it’s corruption, we all know it’s bad governance. If you have a sore in your leg and you don’t take care of it, a lot of things will come—infection will come, eventually you will die.”

“How do 276 girls just get taken?” asked King on Sunday by phone after his event. He plans to keep applying pressure for answers and solutions.

King isn’t the only one who doesn’t plan to let up. The steady stream of community rallies and events in New York are scheduled to continue through the end of May. They include rallies in front of the Nigerian Consulate on May 13 and 23, and a large-scale march through Manhattan on May 30. Many of the events are falling under the umbrella of what the city’s Nigerian residents call a newly emerging movement dubbed “For the Love of Nigeria.”

Many attending rallies said the mass abduction is the final straw in a yearslong decline of safety in the west African country.

“It’s a crying shame. It’s atrocious. It shouldn’t be happening,” said Mary-Anne Etiebet, a medical professional who emigrated from Nigeria in 1991, in front of the consulate on Sunday. “These girls are our future. The fact that hundreds of them can be abducted and nobody can make any noise for two to three weeks just shows how degraded our culture has become, and how nonchalant we are being about life.”

The release earlier this week of a video that allegedly shows about 130 of the students appears to be evidence that at least half of the 286 girls are still alive. It shows them in Muslim grey and black veils, sitting on the ground together, praying. A Boko Haram leader claims they have been liberated.

Kidnapped by the extremist group Boko Haram on April 14, it was the first time any evidence of the girls has been seen since their disappearance. Experts have not yet verified whether the video is legitimate.

Speaking in the video, Boko Haram leader Abubakar Shekau used the bully pulpit to demand the government exchange the girls for Boko Haram “brethren” imprisoned largely in the north of Nigeria, suggesting a possible path to resolve the crisis.

Years in the Making

Experts agree that the problems are widespread and long-standing.

Adotei Akwei of Amnesty International said the Boko Haram insurgency led to about 2,000 deaths in 2013 alone. A total of about 3,000 people have died in attacks at the hands of what Akwei describes as an “armed Islamic group” since 2009.

“This is symptomatic of larger problems in Nigeria,” said Akwei on Monday. He is managing director of Advocacy and Government Relations for Amnesty International. “While no one disagrees that rescuing the girls must be a priority. People think a simple search and rescue mission will fix things.”

According to Akwei, the United States has been slow coming to the aid of the missing girls due to the Leahy Law. The law dictates that the U.S. departments of state and defense cannot provide military assistance to foreign military that violate human rights with impunity.

As for the validity of the Boko Haram video, time will tell. Akwei said that the group’s demands that the Nigerian government exchange prisoners for the girls relates to years of conflict that resulted in states of emergency in certain parts of the country. In the process, thousands of men who may or may not be Boko Haram were incarcerated. Independent inspectors have been unable to verify the circumstances, said Akwei.

As the world holds its breath for the safe return of the girls, New York’s Nigerian community and its supporters are holding out hope it can be a moment of greater change.

“[We need to] keep ringing the bell,” said King. “We can’t let the wicked prevail.”