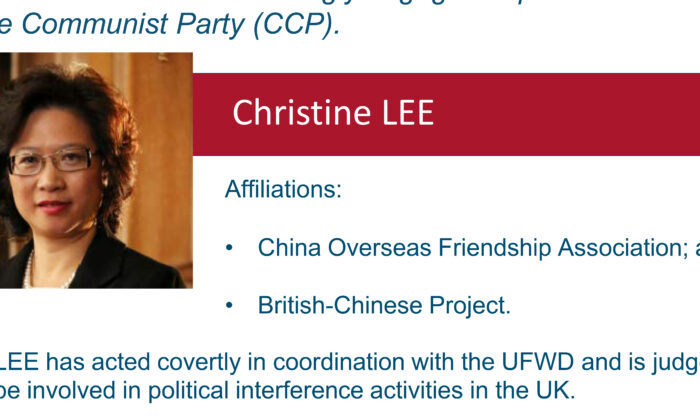 Detail of an MI5 Security Service Interference Alert (SSIA) identifying Christine Ching Kui Lee as "an agent of the Chinese government” operating in the British Parliament, issued by the Office of the Speaker of the House of Commons on Jan. 12, 2022. (House of Commons/PA)
UK

The British government has been urged to investigate claims made by Chinese communist agent Christine Lee that she successfully secured changes to UK immigration legislation in 2006 by exerting influence in the House of Lords, the second chamber of the UK Parliament.

The UK’s MI5 security agency took the unusual step of sending an alert to Parliament on Jan. 12 warning that an individual named Christine Ching Kui Lee has been “knowingly engaged in political interference activities on behalf of the United Front Work Department (UFWD) of the Chinese Communist Party (CCP).”

According to a Sunday Times report, Lee boasted in a 2015 video that Parliament “changed the rules” for Chinese immigrants after she “directly” lobbying members of the House of Lords.

Lee said: “And do you know what they did? They actually changed the rules. Why did they change the rules? Because we were able to voice our concern to the parliament directly through the House of Lord[s].”

Talking in 2013 to China Daily, a Chinese government-owned English-language newspaper, Lee said she managed to persuade the UK Parliament to amend the Immigration, Asylum and Nationality Act in 2006 to loosen rules on permanent residence, employment of illegal workers, and the right to appeal against immigration decisions.

Raising the issue in the House of Lords on Jan. 19, Lord David Alton asked the government “what steps they are taking to investigate reports that Christine Lee obtained amendments to the Immigration, Asylum and Nationality Act 2006 on the behalf of the government of China.”

He urged the government to launch “a broad-based inquiry” into the issue “given the seriousness of the claim that someone now publicly identified by MI5 as a Chinese Communist Party agent, operating across the two Houses of Parliament, successfully subverted our legislative programme by persuading members of your Lordships’ House to table amendments to an Act of Parliament.”

Lord Alton was one of seven UK lawmakers sanctioned by the Chinese regime in March 2021 over their critical stance on the regime’s abuse of Uyghurs in Xinjiang, China.

He said: “Through its sanctions on individual parliamentarians and now the alleged manipulation of our statute book, the Chinese Communist Party has shown itself willingly and brazenly to attack our Parliament.”

Home Office minister Baroness Williams said: “It is concerning that someone who has knowingly engaged in political interference activities on behalf of the Chinese Communist Party has targeted British parliamentarians.”

She said she “cannot comment in detail” on the work of the security services, but said the government is strengthening the UK’s ability to “deter, withstand, respond to, and recover from state threats,” and is aiming to “take a much more assertive and creative approach” to defend the country’s strategic advantages over its adversaries.