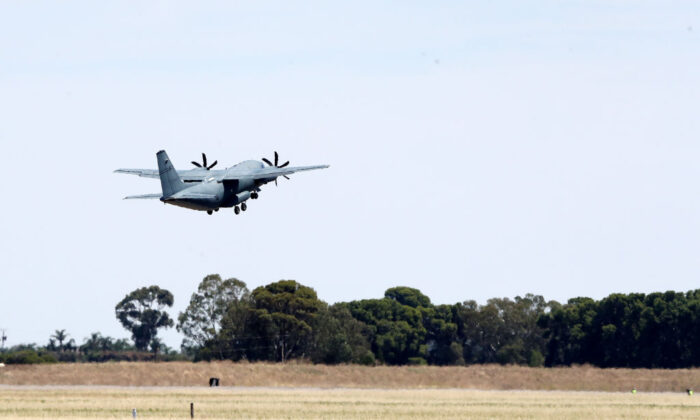 A supply plane departs from the base in Adelaide, Australia on January 31, 2022. The defence force will deliver food and supplies to the town of Coober Pedy in South Australia. (Photo by Sarah Reed/Getty Images)
Australia

Investigators are combing the wreckage from a fatal helicopter crash on the outskirts of Sydney.

Emergency services responded to reports of the crash at around midday on Saturday, hampered by difficult, flood-soaked bushland northwest of the city.

The pilot in his 60s was the sole occupant, and Australia’s transport safety watchdog announced it had launched an investigation into the crash.

A news helicopter was one of the first on the scene with pilot Andrew Millett telling Nine the crash had instantly appeared not survivable.

“You could see there had been an immense impact,” Millett said.

Millett knew the man, and described him as a veteran pilot who was friendly and generous.

The crash, which occurred shortly before 11:50am in bushland at South Maroota, drew police, paramedics, firefighters and the State Emergency Service.

They found the helicopter well alight upon arrival and battled a small blaze that had started before police later established a crime scene.

Flight and helicopter experts from the bureau’s Sydney and Brisbane offices are involved.

But the watchdog is also calling for any witnesses to come forward with any information of the chopper at any stage during its flight.

It is expected to hand down an initial report in six to eight weeks.

Police are expected to address the media later on Sunday morning.