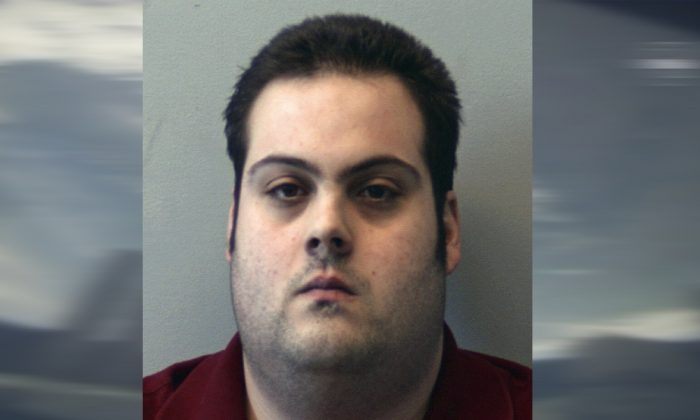 Daniel Frisiello, of Beverly, Mass., in this booking photo released on March 1, 2018. (Beverly Police Department via AP, File)
US News

Probation for Man Who Sent Powder to Trump’s Sons, Others

The judge declined to send Daniel Frisiello to prison, as prosecutors had sought, because of concerns the 25-year-old man from Beverly, who is developmentally disabled, would not respond well to incarceration. But he stressed the sentence wasn’t “lenient.”

“Do not underestimate how serious I am treating your crimes,” Judge Nathaniel Gorton said to Frisiello as the dozens of his family members, friends, and supporters who had packed the court proceeding hugged, cried, and sighed in relief.

Frisiello was also ordered to serve his first year of probation in home confinement and has been banned for the full five years from accessing the internet or sending mail without prior approval. Frisiello also won’t be allowed to have a computer, tablet, or other devices with access to the internet.

Frisiello, who pleaded guilty in October to sending the threatening letters, thanked Groton in brief remarks in court for not sending him to prison. The past year, he said, has been “hell” for his family.

Assistant U.S. Attorney Scott Garland, who had sought a 3-year prison sentence, argued that Frisiello had carefully considered the letter writing campaign, which included 13 letters over three years. He researched the best addresses and took steps to avoid detection, like dropping them off at different mailboxes, Garland said.

“This was not an impulsive thing,” he said. “At every step, there was a chance for deliberation.”

Imposing only probation, Garland said, was akin to sending Frisiello back to the life he had before his arrest, which was largely spent at home on the internet.

Frisiello and family declined to comment after the hearing, but William Flick, his lawyer, argued in court that prison would be physically and mentally harmful to Frisiello, who he said has significant developmental issues from brain damage at birth, autism, and anxiety disorder.

There was a collective gasp in the courtroom when Judge Gorton, known for handing down tough sentences, chose not to imprison Daniel Frisiello, who wrote threatening letters with white powder to many, including the sons of @realDonaldTrump https://t.co/k0Xi29HtHI via @BostonGlobe

Flick also argued probation is appropriately severe for a person with Frisiello’s condition because it takes away what few opportunities he has to interact with society, such as going to work or spending time with family and friends outside the house.

Acknowledging the nearly 90 letters of support written to the judge on Frisiello’s behalf, Flick said it was “tragic” no one in his client’s extensive support network had noticed the signs that his penchant for writing letters to celebrities and other notable people had gone from a seemingly harmless obsession to something far darker.

“He clearly felt like he wasn’t being heard, and so he became threatening,” Flick said.

Prosecutors say Frisiello sent a letter to Donald Trump Jr. that was opened in February by his now-estranged wife, Vanessa, at their New York City home. She called 911 and was briefly hospitalized after she reported she was coughing and felt nauseous.

He also sent a white powder letter to Eric Trump during the 2016 presidential campaign that said his father must drop out of the race or the next letter wouldn’t be fake.

The substance in all of the letters turned out not to be hazardous.

Other letter recipients included Stabenow, the Democratic U.S. senator from Michigan; Michele Dauber, a Stanford University law professor who promoted an effort to recall California judge Aaron Persky; and Sabato, a former underwear model and soap opera actor who is running for Congress in California as a Republican and spoke at the 2016 Republican National Convention.

Hoaxes involving white powder have been common since anonymous letters laced with anthrax spores were sent to media companies and congressional offices days after the terrorist attacks of Sept. 11, 2001, killing five people and infecting 17 others.