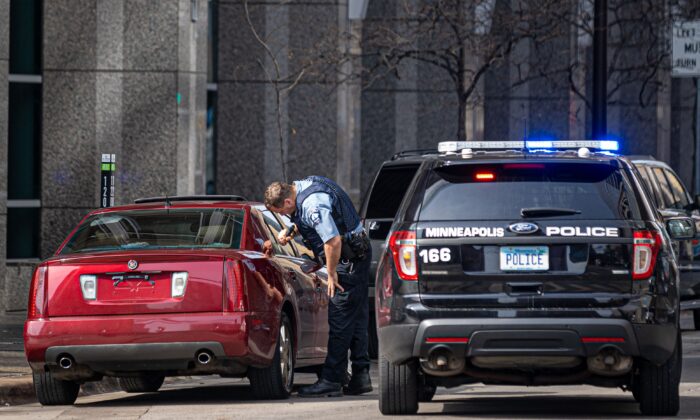 A police officer checks a suspicious car without a plate parked near the Hennepin County Government Center in Minneapolis on March 9, 2021. (Photo by Kerem Yucel/AFP via Getty Images)
Crime and Incidents

Police officers have significantly reduced their proactive policing efforts in the year and a half following the George Floyd protests.

Key proactive policing activities, such as suspect stops, plummeted in the summer of 2020 and continue to trend at a historically low level, according to an Epoch Times analysis. The Epoch Times reviewed police stop data from departments in Minneapolis, Chicago, Los Angeles, Philadelphia, and Seattle.

In contrast to reactive policing, when police respond to crimes after the fact, proactive policing aims to prevent or interrupt crime.

For example, a police officer stops a suspicious car (or person) and conducts a search, uncovers an illegal gun, and thus prevents a potential gun crime.

These activities are often discretionary and hinge on officer morale. When officers feel unappreciated or that it’s too risky to do their jobs, they withdraw, according to research.

In Minneapolis, the epicenter of the Floyd protests, the number of officer-initiated investigative and traffic stops dropped by 80 percent in June 2020.

That month, “Defund the Police” protests had spread across the country, following the death of Floyd at the hands of Minneapolis police officer Derek Chauvin.

Since then, the number of officer-initiated stops has been on a largely downward trend.

Aside from low morale, a shrinking police force has likely contributed to the sustained decline as well.

In contrast, the number of citizen-initiated stops remained relatively steady during the same period.

In Seattle, where a high-profile autonomous zone was set up following Floyd’s death, the number of Terry stops dropped by 60 percent in June 2020.

A Terry stop—a name derived from the landmark 1968 Supreme Court case Terry v. Ohio—is where police can briefly detain a person on reasonable suspicion that they’ve been involved in a crime.

The latest number, from February, stands at 274, which is less than half of the lowest point of the four years prior to the protests.

Each police department names and categorizes police stops in different ways. Some lump all stops together, while others divide them into vehicle and pedestrian stops.

At the Chicago Police Department, the second-largest department in the country, the number of investigative stops dropped by half at the onset of the COVID-19 pandemic and quickly climbed back up.

Then came the Floyd protests, and the number of stops fell by 43 percent and has since lingered at that historic low level through the end of 2021.

Los Angeles and Philadelphia, which have the third- and fifth-largest police departments in the country, respectively, both saw a similar pattern to that of Chicago.

At the onset of the pandemic, the number of stops by Los Angeles police dipped, but quickly picked up until June 2020, when the number dropped by 43 percent.

By January, the number remained low at 27,210, less than half of what it was two years ago.

In contrast, the number of citizen 911 calls responded to by police officers remained rather steady during the same period.

For Philadelphia, the number of vehicle and pedestrian stops rose occasionally after June 2020, but the high points were still thousands of stops below the lowest points of the four years prior to the protests. For February, the numbers were 5,943 and 444, respectively, with both being historic lows.

The protests also fueled the movement to put more restrictions on police.

At least 26 states have since approved police reform legislation, and many police departments have tightened their policing policies.

This month, the Los Angeles Police Commission put out more restrictions on traffic stops, asking officers to record their reasoning on body-worn cameras before they search a car that has violated traffic rules.

Police often conduct such searches during traffic stops to uncover potential illegal drugs or weapons. The new policy doesn’t specifically define the appropriate kind of reasoning for initiating a search. Officers that fail to comply with the policy will face disciplinary actions.

Proactive policing can effectively reduce crime in the short term, especially in high-crime areas, according to a consensus study report by the National Academy of Sciences.

The academy convened a panel of leading scholars to review decades of research on proactive policing and issued the report in 2017.

Some experts, including University of Utah professor Paul Cassell and Michigan State University associate professor Scott Wolfe, say the decline of proactive policing in the past two years has contributed to the nationwide homicide spike.

All the above-mentioned cities saw violent crime rise in 2021.

Minneapolis recorded the city’s highest number of homicides in 20 years, Seattle’s violent crime rate rose to a 14-year-high, Chicago saw more than 800 homicides—the largest total in 25 years—Los Angeles’ homicide rate jumped by 12 percent, and Philadelphia logged 559 homicides—the most on record for the city.