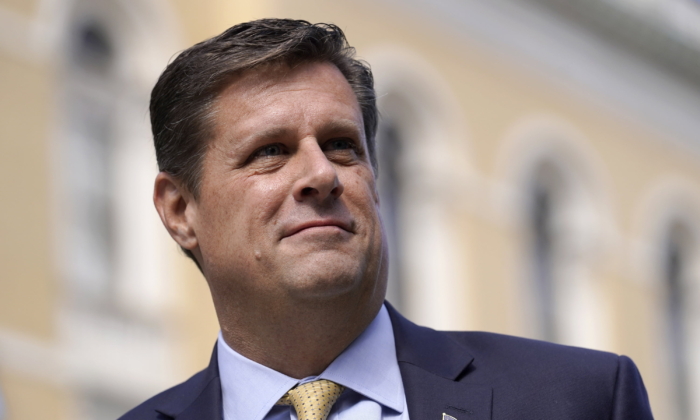 Diehl, a former state representative, defeated Chris Doughty, a businessman who supports abortion and has indicated that he does not align with Trump.

Diehl will face Democrat Attorney General Maura Healey in November. Healey easily won her primary with 85 percent of the vote as of 10:28 p.m. ET on Tuesday.

Ahead of the election, Diehl touted the support of the state Republican Party. At the May party convention, he received 71 percent of the delegate votes.

Diehl also received the support of popular Boston conservative talk radio host and Washington Times columnist Jeff Kuhner along with The Boston Broadside, a small but politically-connected conservative newspaper, which has gone to bat for the candidate.

Doughty put $2 million of his own money into the race. He said that Diehl would not be able to defeat Healey in Massachusetts, a blue state. He scored an endorsement from the Boston Globe, which argued that he is the one to beat Healey.

Gov. Charlie Baker, a Republican, has governed Massachusetts since 2015 and is term-limited.

Diehl told The Epoch Times that he believes there is an opening to defeat Healey due to her far-left policies.

“She believes in her own personal ideology and that it is way more important than serving a balanced agenda that serves the entire state and its population,” Diehl told The Epoch Times.

Healey has said that pregnancy support centers are dangerous and has called for more drag queen events for schools.

“I am honored to receive the Democratic nomination for Governor of Massachusetts,” Healey wrote on Twitter on Sept. 6.

In a victory speech on Tuesday night, Healey vowed to cut taxes by tapping excess state revenue, decrease the costs of housing and energy, and make childcare more affordable, among other promises.

“And let me say this again. As long as I’m governor, we will always have access to safe, legal abortion,” Healey said.

Sen. Elizabeth Warren (D-Mass.) congratulated Healey, shortly after she was projected as the winner of the primary.

“Woo-hoo! I’ve seen firsthand how [Maura Healey] has the experience, keen policy knowledge, and steadfast commitment to deliver results for Massachusetts—and now she’s one step closer to shattering a glass ceiling as our next governor,” Warren wrote on Twitter.

Former President Donald Trump held a telephone town hall in support of Diehl on Sept. 5. Trump endorsed Diehl in October 2021, more than a year before the midterm election.

“He’s the only conservative running for Massachusetts governor,” Trump said at the telephone rally, according to the Boston Herald. “Geoff is a proven fighter who successfully pushes back on the liberal extremists.”