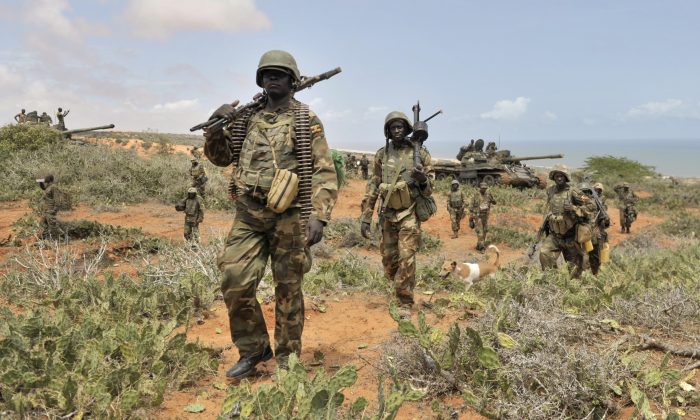 In this photo taken Sunday, Oct. 5, 2014 and provided by the African Union Mission to Somalia (AMISOM), African Union (AU) soldiers march along the top of a hill overlooking the al-Shabab stronghold of Barawe, a coastal town 220 kilometers (135 miles) southwest of Mogadishu, in Somalia. Officials in Somalia say AU and Somali troops have seized Barawe, the last major stronghold held by the Islamic militant group al-Shabab, with the AU claiming it as a significant victory because al-Shabab had used the port to bring in arms and fighters and export charcoal, a multi-million-dollar business. (AP Photo/AMISOM, Tobin Jones)
Africa

MOGADISHU, Somalia—African Union and Somali troops on Sunday won control of a key coastal town that had been used by the Islamic militants of al-Shabab, forcing the insurgents from their last significant stronghold and major money-making port.

The African Union said that Barawe, 220 kilometers (135 miles) southwest of Mogadishu, had not been controlled by Somali government forces since 1993. Al-Shabab used the Barawe port to bring in troops and weapons and to export charcoal worth millions of dollars to fund its military operations.

The loss of Barawe is the latest blow to al-Shabab, which has seen the territory it controls shrink rapidly since 2011, when its fighters fled Mogadishu after years of urban, close-range combat with African Union troops. Al-Shabab once controlled nearly all of the seaside Somali capital.

One month ago, on Sept. 1, U.S. airstrikes targeted and killed al-Shabab’s leader, Ahmed Abdi Godane, who was the spiritual leader of the group, which is linked to al-Qaeda-linked. The U.S. had offered a reward of up to $7 million for information leading to his arrest.

Godane had publicly claimed al-Shabab was responsible for last year’s deadly attack on Westgate Mall in Nairobi, Kenya, in which 67 people were killed.

Somali military officials said that al-Shabab fighters left Barawe by sea and land before African Union and Somali troops entered the town. The retreating rebels tried to ambush the government forces at the city’s edge, but that tactic was unsuccessful.

“Our forces have peacefully entered the town after weeks of siege,” Somali military Col. Abdi Hussein told The Associated Press by phone from Barawe. “Residents are feeling relief because of our arrival.”

No al-Shabab official could immediately be reached for comment. The group rarely puts up big resistance when it senses it is out-manned.