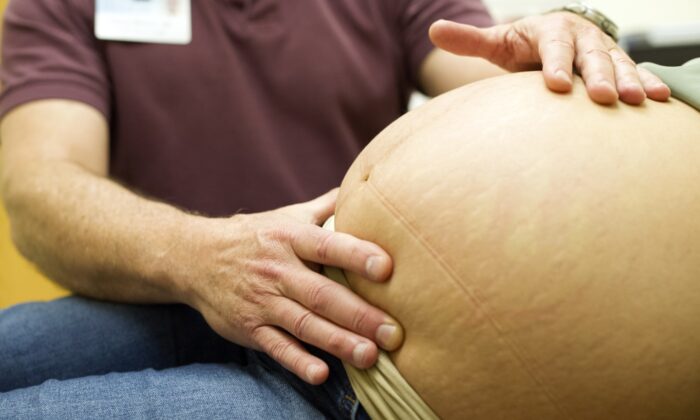 A doctor examines an eight-month pregnant woman at a health center in Denver, Colorado on March 15, 2017. (Jason Connolly/AFP via Getty Images)
Texas

As some of the nation’s largest employers vow to pay their employees to travel out of state for abortions, an insurance company in Texas went viral on social media for promising to cover employees’ expenses related to having a child.

Buffer Insurance, a Dallas-Fort Worth area company, responded to the U.S. Supreme Court’s overturning of the Roe v. Wade decision with a pro-life message, pledging to adjust its benefits policies to better support employees to be new parents.

Specifically, the company said it would provide its female employees with paid maternity and paternity leave, as well as pay for the medical costs of giving birth to or adopting a baby.

“Secular companies are paying the travel costs for employees to abort babies out-of-state,” Buffer wrote in a June 27 Facebook post. “Today we are announcing that Buffer will pay the costs for our employees who birth babies.”

It is also offering such benefits to its insurance clients.

“Employers: If you’d like to learn how you can provide these benefits to your employees, let us know. We have ready-to-use policies you can add to your employee handbooks,” it added.

Paying Employees to Get Out-of-State Abortions

The move comes as a growing list of high-profile companies, including Walt Disney Company, Meta, Comcast, Condé Nast, Warner Bros., JPMorgan Chase, and Johnson & Johnson, said they will pay their employees who have to travel to another state to get an abortion in the aftermath of the end of Roe.

On June 24, the Supreme Court’s 6-3 conservative majority overruled Roe, which legalized abortion at a national level. The new decision doesn’t outlaw abortion but instead hands the question of abortion access back to individual states.

Prior to the ruling, a wave of corporations had already offered to pay in travel expenses for its abortion-seeking employees after a leaked draft opinion suggesting that the high court was intended to revoke Roe. Those companies include Microsoft, Apple, Amazon, Airbnb, Starbucks, Tesla, Uber, PayPal, and Yelp.

In Texas, the Republican-led state Legislature last year passed a “trigger law” that would automatically install a “heartbeat” abortion ban 30 days after Roe no longer applies. On Friday, the Texas Supreme Court ruled that Texas can enforce its pre-Roe abortion ban, which has been unenforceable over the past decades but remained a part of the state law.

Under the ban, which dates back to 1925, performing an abortion carries a crime punishable by up to 10 years in prison. The court’s order, however, only allows for civil enforcement of the ban, meaning that prosecutors will not be able to press criminal charges against abortion providers.

Republican Gov. Greg Abbott, who signed the bill that outlaws abortions once a heartbeat is detected in a fetus, said his administration will continue to “save every child from the ravages of abortion and help our expectant mothers in need.”

“The U.S. Supreme Court correctly overturned Roe v. Wade and reinstated the right of states to protect innocent, unborn children,” Abbott said. “Texas has also prioritized supporting women’s healthcare and expectant mothers in need to give them the necessary resources so that they can choose life for their child.”