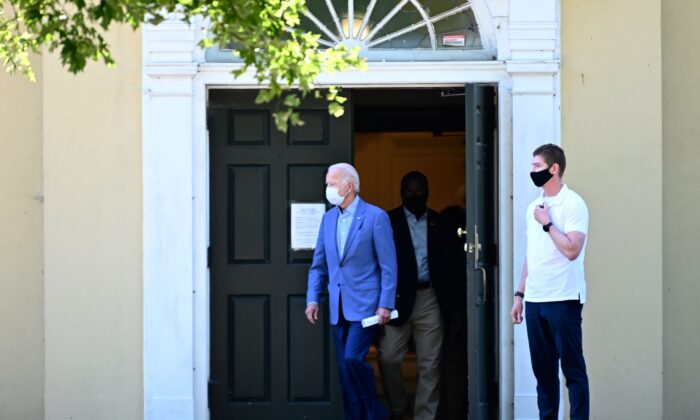 Pro-life evangelicals for Joe Biden wrote an open letter to the president on March 7, calling on him to “honor his commitment” and telling him they “feel used and betrayed” after the Hyde Amendment was excluded from the Democrats’ $1.9 trillion CCP virus relief package.

The Hyde Amendment is legislation that took effect in 1980 to prohibit federal funds from being used to perform abortions, with exceptions for life-saving situations or pregnancy resulting from rape or incest.

“We are very disappointed about the COVID-19 relief package’s exclusion of the Hyde Amendment, a longstanding bipartisan policy that prevents taxpayer funding for abortion,” the letter reads.

“We’re even more upset that the Biden administration is supporting this bill. As pro-life leaders in the evangelical community, we publicly supported President Biden’s candidacy with the understanding that there would be engagement [with] us on the issue of abortion and particularly the Hyde Amendment.”

The evangelicals said they felt used and betrayed because, to obtain their support, they were told that there would be dialogue with them, but they said it hadn’t occurred so far.

“The Biden team wanted to talk to us during the campaign to gain our support,” the letter reads, “and we gave it on the condition there would be active dialogue and common ground solutions on the issue of abortion.

“There has been no dialogue since the campaign.”

Last month, the president of a Catholic civil rights organization released a scathing rebuke of the Equality Act introduced by Democrats, saying it promotes “the most comprehensive assault on Christianity ever written into law.”

Bill Donohue, president of the Catholic League for Religious and Civil Rights, said in a press release that the “patently anti-Christian” legislation would allow “gay rights to trump religious rights.”

He said that although the act claims to be about “ending discrimination,” and that may indeed be the intention, the repercussions would effectively secularize religious entities and force adherents to violate religious codes of conduct.

“Health care providers would be forced to provide hormone therapies and surgical procedures that are required to change the physical characteristics associated with sex changes,” Donohue noted, asking if anyone would be allowed to object, or point out the “long-term physical and mental problems associated with sex reassignment.”

Kansas City Archbishop Joseph Naumann said in a recent interview that Biden should acknowledge that his support for abortion contradicts his professed Catholic faith.

“The president should stop defining himself as a devout Catholic, and acknowledge that his view on abortion is contrary to Catholic moral teaching,” Naumann said.

“It would be a more honest approach from him to say he disagreed with his church on this important issue and that he was acting contrary to church teaching.”

Biden for decades supported the Hyde Amendment but reversed the stance in 2019. “If I believe health care is a right, as I do, I can no longer support an amendment that makes that right dependent on someone’s ZIP code,” he told a crowd at an event that year.