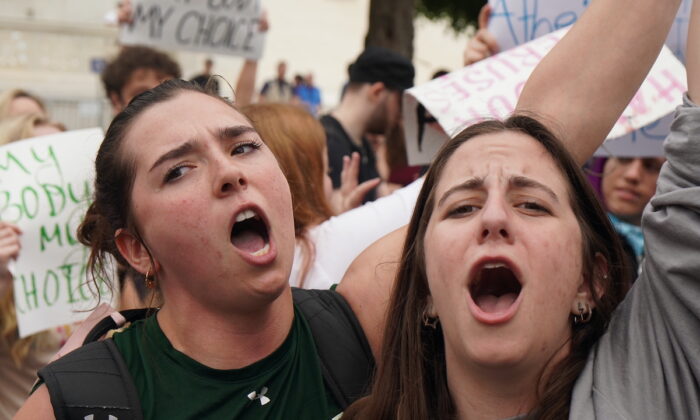 Pro-Life and Pro-Abortion Protesters Shout Outside the Supreme Court

WASHINGTON D.C.—A few pro-life protesters started the day outside the Supreme Court, but as the day went on, pro-abortion protesters dominated the scene.

At 9 a.m., the few protesters present were mostly from pro-life groups. The scene was quiet under slightly cloudy skies.

Near the court, a few people from different sides discussed the issues. Asher Pate, a pro-abortion atheist visiting Washington, spoke with Bryan Kemper, a pro-life Catholic. Both were civil in their exchange.

For the pair, the core of the abortion debate was why human life is valuable. Pate agreed that it is wrong to kill a sentient human being, but said he didn’t believe unborn humans were sentient.

“I think people are using a circular argument,” he said. “They’re just saying, ‘A person is a person, and therefore we should value that.’ I want an answer to: ‘Why is the person valuable?’”

Kemper, a Catholic argued based on his faith that all human life is inherently valuable. But the two couldn’t come to a full agreement due to their starting point rooted in different philosophies.

Often, the same people quickly jumped from quiet defenses of their views to screamed accusations.

“I just hope that somebody here, even one person, changes their mind about abortion,” she said. “Those people need to be prayed for.”

Shortly after, she screamed “Dead baby! Dead baby!” at the pro-abortion protesters. Then, Pate entered a shouting match with her.

Read More
Chapter Seven, Part I: The Destruction of the Family (UPDATED)

“God is dead because of people like you,” one pro-abortion protester shouted at a pro-life one.

“[Expletive] Kavanaugh” and “[Expletive] Amy too,” chants started. Every pro-abortion chant lasted for several minutes and ended with an ovation of yells and applause. Few were original.

Kate, a pro-abortion protester who led the chants, said it felt great.

“It feels like a swell of solidarity as well as sort of collective power, which I think is really important,” she said. “I think it’s the only way we’re gonna make any change here.”

Too few pro-life protesters were present to compete with the shouts of the crowd. But the protesters hurriedly changed their own chants, exchanging the word “women” for “people” in some places.

“If I wanted the government in my uterus, I’d [expletive] a senator,” several pro-abortion protesters said, as if it were a new phrase.

Pro-abortion protester Alissa Greenwood said she would continue appearing at the Supreme Court until it made its decision.

Greenwood also brought her baby along.

“My baby should make that decision as she grows up. She should have that as an option,” she said.

After hours of mostly one-sided chanting, the protest escalated with the arrival of about fifteen well-organized pro-life protesters.

“We are a secular, nonpartisan organization dedicated to ending violence against human beings in all stages of life and in all circumstances,” he said.

Most lifted pro-life signs with messages like “Atheist Against Abortion.” Other signs blamed abortion on “the patriarchy.”

For the endless shouting match, the group was armed with megaphones and drums. As they arrived, they matched the shouting crowd of pro-abortion demonstrators with pro-life takes on classic leftist chants.

The two groups chanted slogans at each other from feet apart until police intervened to stand between them.

With the police between them, the two groups began a long chant battle. It sounded as if they genuinely believed the court case would be granted to the side that chanted the loudest.

The shouting match was a “debate” over who would be louder, said pro-abortion protester Lauren Ellis.

“It shows who has more people,” she said.