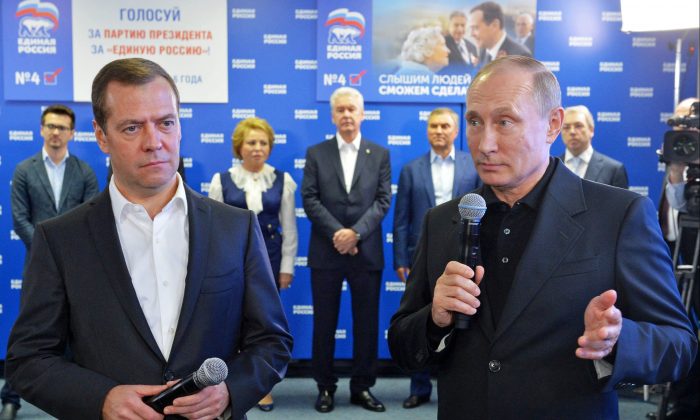 With 93 percent of the ballots from Sunday’s vote counted, the United Russia party was on track to get 343 of the 450 seats in the State Duma, the lower house of parliament, CEC head Ella Pamfilova said. She said she did not expect the results to change significantly in the count of the remaining ballots.

It’s an immense gain for the party that already held a majority in the previous parliament — soaring by more than 100 seats. The party now has enough to amend the constitution on its own.

The three other parties that had been in the previous parliament and that largely cooperated with United Russia will also be in the new Duma, though all in reduced numbers. The Communists will have 42 — a sharp drop from 92 — the nationalist Liberal Democrats 39 and A Just Russia 23.

Two other seats were won by candidates from small parties and one by an independent. In contrast to the two previous elections, only half the seats in this election were chosen by national party list; the others were contested by single-seat districts.

Turnout was distinctly lower than in the last Duma election in 2011 — less than 48 percent nationwide compared with 60 percent.

Complaints of violations came from around the country, including ballot-box stuffing and so-called “carousel voting” in which voters are transported to several locations to cast multiple ballots.

Pamfilova said the national Investigative Committee had launched a criminal probe of one voting district, where video from a closed-circuit camera appeared to show a poll worker carefully dropping multiple ballots into the box.

Pamfilova said other violations reports would be looked into and that results from three precincts could be annulled.

Anger over widespread fraud in the 2011 election sparked large protests that unsettled authorities by their size and persistence.