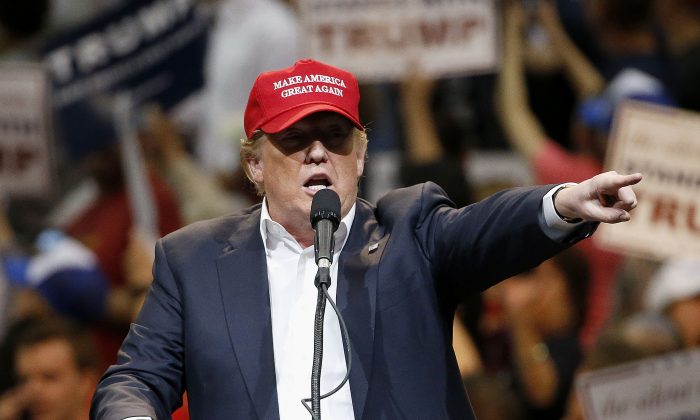 WASHINGTON—As America’s leading pro-Israel group prepares to hear from nearly all the presidential candidates, most eyes in the crowd of thousands of participants will be on GOP frontrunner Donald Trump.

He’s the wild card whose previous comments about Israel have created some anxiety among many who will attend the American Israel Public Affairs Committee policy conference this week in Washington.

Much like the American electorate at large, the pro-Israel community in the United States is anything but monolithic, and this year’s conference appears set to highlight those different constituencies, including socially liberal Democratic Jews, establishment Republican Jews, and conservative evangelical Christians.

In a broad sense, all the candidates confirmed to speak on Monday fall into one of those categories. Except Trump—and therein lies the angst.

“Trump has said a lot of things about Israel over the years, most of it favorable but some of it more ambiguous,” said Josh Block, a former AIPAC official who now heads The Israel Project. “This will be an opportunity to address the ambiguity before a serious foreign policy audience.”

AIPAC bills itself as nonpartisan and has never endorsed a candidate. Yet the organization has delved into highly partisan political debates over issues of interest to Israel, most recently and notably the Iran nuclear deal, which it vehemently opposed. In that, it is at odds with ardent deal supporters Clinton and Democrat Bernie Sanders, and to a certain degree, with Kasich, the lone Republican who has not said he would automatically rescind the pact.

Trump and Cruz have promised, if elected, to rip up the agreement.

Beyond that, Cruz has pledged absolute support for Israel, but Trump has been far from clear on how he would approach matters of deep concern to pro-Israel voters.

Cruz’s campaign website features an entire section on Israel; Trump’s does not address it all.

Unlike Cruz, Trump has not said he would move the U.S. Embassy from Tel Aviv to Jerusalem, a perennial Republican campaign promise, and, unlike Cruz, he has said he will be neutral as a negotiator in trying to resolve the Israeli-Palestinian conflict. Cruz’s campaign website features an entire section on Israel; Trump’s does not address it all.

On Mideast peace talks, Trump says: “You understand a lot of people have gone down in flames trying to make that deal. So I don’t want to say whose fault it is—I don’t think that helps.” He also put off calls to clarify his position on the status of Jerusalem.

By contrast, Cruz is unabashedly pro-Israel and he called for Secretary of State John Kerry’s resignation over what he considered anti-Israel bias. “A Cruz administration will on day one recognize Jerusalem as the eternal, undivided capital of Israel and the U.S. Embassy will be moved to Israel’s capital city,” Cruz says on his website.

Clinton, meanwhile, has a long history in the Middle East, including overseeing as secretary of state the Obama administration’s first attempt to broker Israeli-Palestinian peace with former Sen. George Mitchell as envoy. Her stance against Jewish settlements on land claimed by the Palestinians has been criticized by some in the pro-Israel community, but she has been received warmly by pro-Israel groups in the past, not least because she has a track record.

Trump, on the other hand, has something of a checkered record with pro-Israel Republicans. He drew boos last year from the Republican Jewish Coalition when he refused to take a stance on the embassy location and further raised eyebrows by using what many consider to be offensive stereotypes in moments of attempted levity. Similar remarks will not be welcomed at the AIPAC conference.

In addition, as they have done nationally, Trump’s positions on immigration and Muslims and his apparent vacillation on support he is getting from figures known for anti-Semitic and racist rhetoric have caused concern among AIPAC members. And, as with other communities, comparisons of Trump to Hitler and Mussolini have clouded their impressions.

Some have announced they will protest Trump, if not by disrupting his speech by walking out. Others have said the speech will be an important opportunity to hear Trump explain his views. The debate has played out in dramatic fashion since AIPAC issued its invitations and candidates began responding to them.

South Florida Rabbi Jeffrey Salkin is among a group of about 40 rabbis that plans to boycott Trump’s address Monday evening, saying his appearance “poses political, moral, and even spiritual quandaries.”

“We have been urging rabbis to simply not attend the Trump speech—to let our absence be felt and noted,” Salkin wrote in a column for the Religious News Service last week. “Sometimes, you just have to scream—even silently.”

Then there are those who believe the speech will be an important opportunity to hear Trump explain his views, no matter how much they may disagree, and stay on good terms with a viable candidate for the highest office in the land.

“It’s important that the lobby keep itself on decent terms with whatever powers govern in Washington,” commentator J.J. Goldberg wrote in the Jewish newspaper The Forward. “Who holds those powers is an important question, never more so than this year, but it’s not a question AIPAC exists to answer.”

That may be true and the campaign battles will certainly continue no matter what the candidates say at the conference. But Trump’s speech, in particular, will be dissected for months to come for clues on his views.