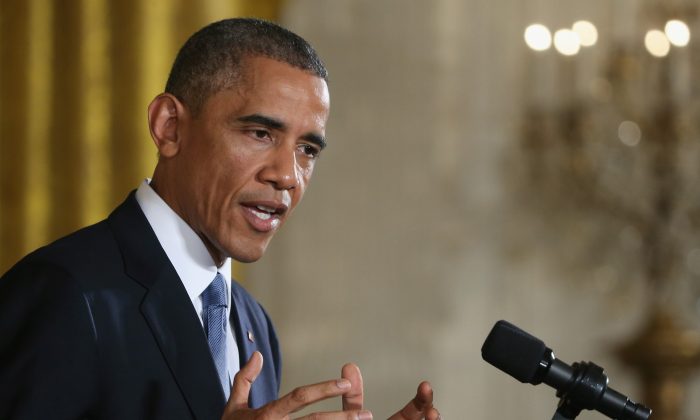 U.S. President Barack Obama speaks to the media during a news conference in the East Room a day after Democrats lost the US Senate Majority, November 5, 2014 in Washington, DC. He promised to take "executive action" on immigration unless Republicans would pass immigration reform. (Mark Wilson/Getty Images)
News

Pro-immigration and labor groups called on president Obama to stop the deportation of illegal immigrants with his executive powers now that the mid-term elections are over.

“We look forward to a big and bold administration relief that you have promised us,” said New York Immigration Coalition president Steven Choi at a press conference in midtown Manhattan on Thursday.

The Obama administration had planned to shield millions of illegal immigrants from deportation through executive action by the summer of 2014, but its implementation has been delayed to after the mid-terms.

The proposed executive action would expand the Deferred Action for Childhood Arrivals (DACA) program to potentially protect millions of illegal immigrants to remain in the United States from deportation.

DACA was created in 2012 to grant a two-year deportation reprieve for illegal immigrants between the ages of 16 and 31 who came to the US as a child, has graduated from high school, and doesn’t have a criminal record.

“As a United States citizen I always vote for my family. And I know that the thousands of Latinos that Make the Road New York spoke to on Tuesday do as well,” said Irania Sanchez. “Now is the time for administrative action to protect millions of our neighbors and family members.”

After Tuesday’s election, Obama reiterated that he would take executive action on immigration unless Congress passed immigration reform, alluding to a senate bill from 2013—currently in limbo—that would provide a path to citizenship for illegal immigrants already in the United States.

Senate Republicans had previously criticized the decision to delay executive action on immigration as a political ploy.

“What’s so cynical about [September 7th’s] immigration announcement is that the president isn’t saying he’ll follow the law, he’s just saying he’ll go around the law once it’s too late for Americans to hold his party accountable in the November elections,” Senate minority leader Mitch McConnell said in September.

Meanwhile, six Republican Senators have sent a letter to Senate majority leader Harry Reid promising to use “all procedural means necessary” to draw attention to Obama’s proposed expansion of DACA if Democrats don’t themselves stop the expansion during the lame-duck session.

“We write to express our alarm with President Obama’s announced intention to take unilateral executive action by the end of this year to lawlessly grant amnesty to immigrants who have entered the country illegally. The Supreme Court has recognized that “over no conceivable subject is the power of Congress more complete” than its power over immigration,” reads the letter, which was signed by Senators Tez Cruz of Texas, Mike Crapo of Idaho, Mike Lee of Utah, Pat Roberts of Kansas, Jeff Sessions of Alaska, and David Vitter of Louisiana.

Cruz, whose office sent the letter to Reid, had previously spoken for 21-straight hours in a filibuster of a 2013 Senate bill that would fund the Affordable Care Act.

“Should you decline to defend the Senate and the Constitution from executive overreach, the undersigned Senators will use all procedural means necessary to return the Senate’s focus during the lame duck session to resolving the constitutional crisis created by President Obama’s lawless amnesty,” the letter concludes.

At the press conference on Thursday, congressman Charles Rangel dismissed the Republican opposition to an executive action on immigration as belonging to the political fringe.

“There’s not one person that identifies as a Republican that’s prepared to attack the president over this issue publicly,” Rangel said. “There’s a handful of people, a cancer, that can’t believe they lost the Civil War and that when they came here, it was not suppose to be a European nation, they say it, we’ve lost America as we know, well damn it that’s a done deal, they better get used to it.”

Addition reporting by the Associated Press