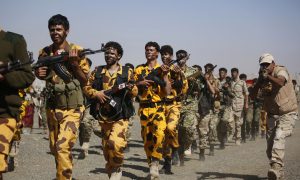 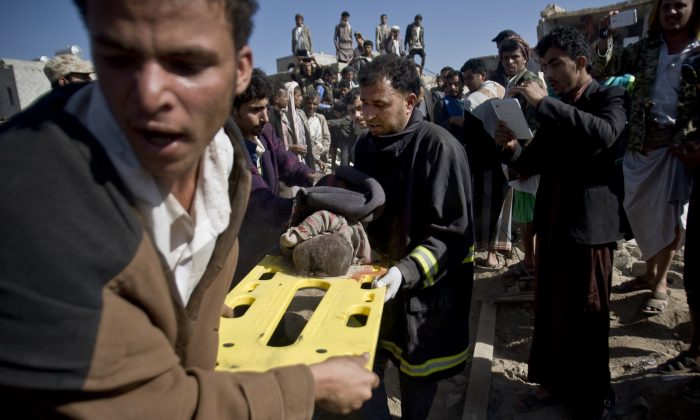 In this Thursday, March 26, 2015 file photo, people carry the body of a child they uncovered from under the rubble of houses destroyed by Saudi airstrikes near Sanaa Airport, Yemen. (AP Photo/Hani Mohammed)
Middle East

SANAA, Yemen—A drive-by shooting in Yemen killed a top pro-government militia leader and five of his companions in the southern city of Aden on Thursday, just hours after he reluctantly handed over control of the city’s strategic port to government troops, Yemeni security officials said.

The officials said gunmen opened fire from a speeding car in the early morning hours, killing Ahmed al-Idrisi and five others as they were leaving a wedding party in the Mansoura neighborhood.

No one immediately claimed responsibility for the attack. Yemen’s al-Qaida and Islamic State affiliates have exploited the country’s civil war to run lucrative smuggling operations through the Aden port.

The officials claimed that al-Idrisi publicly backed the internationally recognized government but maintained secret deals with extremists and anti-government forces.

Yemen’s fighting pits the country’s internationally recognized government and a U.S-backed Saudi-led coalition against Shiite rebels known as Houthis, who are allied with a former president.

Meanwhile in Taiz, Yemen’s third largest city, one of the last hospitals that is working, al-Tharwa, said it came under attack on Wednesday and that “bullets and shrapnel” wounded at least 20 of its staff.

Taiz is in government hands, but it is besieged by the rebels who have been indiscriminately shelling the war-devastated city and blocking the delivery of humanitarian aid for months, according to residents and aid groups.

The U.N. says the war in Yemen has killed at least 5,884 people since March, when fighting escalated after Saudi Arabia began launching airstrikes targeting the rebels.

All officials and residents spoke on condition of anonymity because they were not authorized to speak to reporters or feared reprisals.