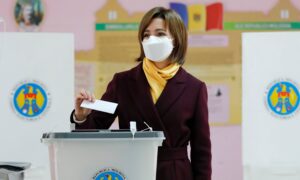 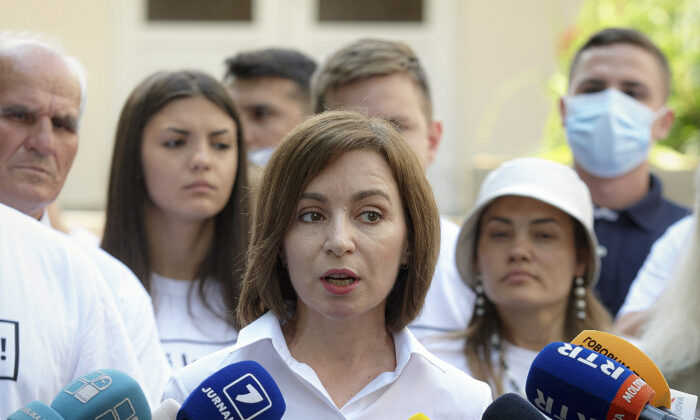 Moldova's President Maia Sandu speaks to the media after casting her vote in a snap parliamentary election, in Chisinau, Moldova, on July 11, 2021. (Aurel Obreja/AP Photo)
Europe

Sunday’s election was called by President Maia Sandu, who sought to gain a parliament made up of pro-EU reformists in the former Soviet republic.

The Party of Action and Solidarity, or PAS, took almost 53 percent of all votes, compared to the electoral bloc of Communists and Socialists, which took 27 percent. Only one other party passed the threshold to gain seats in Moldova’s 101-seat legislature.

Voter turnout in the nation of 3.5 million people—Europe’s poorest country, landlocked between Ukraine and Romania—was just over 48 percent.

Sandu, a former World Bank official who used to lead the PAS, has promised to clean up corruption, fight poverty, and strengthen relations with the EU.

After ballots closed Sunday the president said she hopes the election would “be the end of a hard era for Moldova.”

“I hope today will be the end of the thieves’ reign over Moldova … People must soon feel the benefits of a clean parliament and a government that actually concerns population problems,” she said.

In 2014, Moldova signed a deal with the EU on forging closer ties, but high levels of corruption and lack of reform have hindered development in the country, which ranked 115th out of 180 countries in Transparency International’s 2020 Corruption Perception Index.

In last year’s presidential election, Sandu beat Moscow-friendly incumbent Igor Dodon, the current leader of the Socialists, who campaigned on high social spending, traditional family values, and a distrust of closer ties with the West.

Dodon told a news conference Monday that “this is democracy, people wanted change,” but expressed concerns over the reformists’ ability to govern the country.

The election, which featured more than 20 parties, was called in April by Sandu after the country’s Constitutional Court abolished a state of emergency that was introduced to handle the coronavirus pandemic.

The pro-Western president was hoping to secure a government she can work to enact reforms.

Vadim Pistrinciuc, executive director of Chisinau-based Institute for Strategic Initiatives, and a former lawmaker, told The Associated Press that the election result is “historical.”

“For the first time a single pro-European party takes a full [parliamentary] majority,” he said, but added that if the reformists fail to deliver change, it would bring “tremendous disappointment.”

Dionis Cenusa, an analyst at the Chisinau-based think tank Expert Group, said that the PAS parliamentary majority “is enough to start a huge reform wave.”

By Corneliu Rusnac and Stephen McGrath