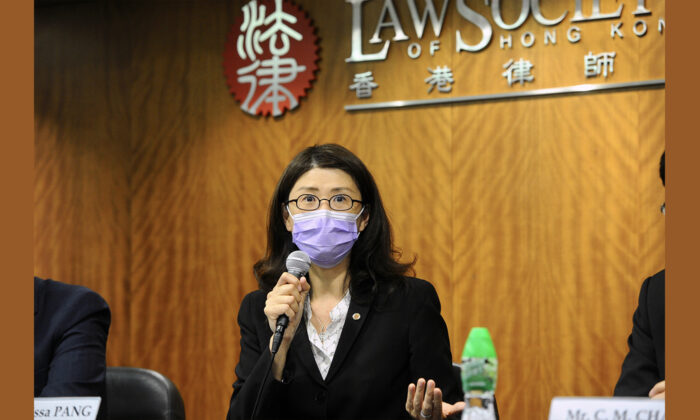 Melissa Kaye Pang, the former president of the Hong Kong Law Society, who is known to be from the pro-Beijing camp, was re-elected with five other candidates, for the six available seats in the Council of Law Society of Hong Kong on Aug. 23. Mark Daly, a human rights lawyer, considered to be “liberal” by critics, failed in his re-election bid. The number of “liberal” Council Members has been reduced from five to four out of the 20-member Council.

Vincent Tso is the chairman of the Legal Profession Advancement Association Limited. The Association is a corporate elector in the legal subsector of the Election Commission of Hong Kong, after the “improvement of the electoral system.”

The introduction of the Association stated that it is committed to promoting integration with the mainland legal service market and strengthening cooperation with relevant legal professional institutions in mainland China.

Hau Pak-sun is the deputy officer of the Legal Committee of the Council for the Promotion of Guangdong-Hong Kong-Macao Cooperation.

Pang and Chan Chak-ming, the president of the Law Society, appeared in the three-minute music video.They wore the jackets of the Law Society and danced in front of the Law Society’s emblem, singing “Rule of Law is Strong” as well as other songs. People criticize this as a “loyalty dance” (a dance showing respect to Mao Zedong during the Cultural Revolution in mainland China).

However, he believed that “there is no need to sing a song.” To prove the existence of the rule of law in Hong Kong and the independence of the judiciary, one can rely solely on the cases, the judgments of the judges and the common law system, and the public opinion is the best judge.

And now, when the president of the Law Society had to sing about this, “It shows that what is being sung contradicts reality” and “the rule of law in Hong Kong has been questioned and doubted by many people.”

Soon after taking office, Pang agreed with Wang Zhenmin, head of the Legal Department of the Liaison Office of the CCP in Hong Kong, saying that the mainland’s Constitution is not just a national law, but a “supreme” law that applies to Hong Kong.

During the anti-extradition law amendment bill movement in 2019, she criticized many people who did not agree with the government and disrespected the laws enforced by the government. She said that the Law Society “must not sit idly by” when they faced “ruin scenes and violent acts.”

In her speech at the opening ceremony of the legal year in 2021, she criticized Tai Yiu-ting, a former associate professor of the Law Department of the University of Hong Kong, without mentioning his name, saying that a “well-known scholar” had advocated that abiding by the law is not the condition of the rule of law, and she wondered whether the public needed more time to understand the concept of “rule of law.”

She also criticized Alan Leong Kah-kit, senior counsel from of Civic Party, without mentioning his name. It is becaused after the implementation of the Hong Kong national security law,” Leong was invited by the European Parliament and the United States for discussion. He rejected the invitations twice because he was worried that someone would say something unpleasant about the CCP.

Pang pointed out, “We should not tell foreign friends that mere communication may violate the national security law,” stressing that Law Society will have the responsibility to “explain the situation in Hong Kong” to the world “fairly and objectively.”

Before the re-election of the Law Society’s Council last year, the Society was criticized by the CCP’s official media People’s Daily and the then Chief Executive Carrie Lam Cheng Yuet-ngor. It was warned not to be “political,” and that once the Law Society “reduces to a political organization,” the government may no longer cooperate with it.

Among them, People’s Daily emphasized that the Law Society needed to “draw a clear line with the rioters who oppose China and disrupt Hong Kong,” and it used the example of the Hong Kong Professional Teachers’ Union that was disbanded due to political pressure, citing the organization had “lost recognition from the Hong Kong government and collapsed overnight.”

Jonathan Ross, “liberal” candidate seeking re-election,withdrew from the election and claimed that three days before the election he had been threatened by an anonymous person.

The so-called “professional” candidates, who were from the pro-establishment camp, all won, and the “liberal” candidates all lost in the election.

Chan Chak-ming, the current chairman, is a former member of the CCP’s rubber-stamp legislature of Jinan city.

In addition, Chan also said that the Law Society will continue to promote the “Guangdong-Hong Kong-Macao Greater Bay Area Bar Examination,” which he believes is very important for the development of young lawyers.

He praised the speech from Xi Jinping on July 1 as “inspiring.”