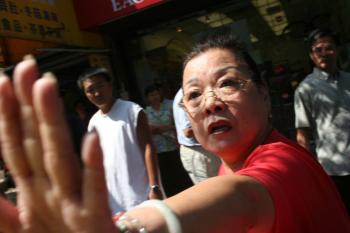 FLUSHING, New York City—A quiet afternoon in Flushing turned turbulent at a Quit the Chinese Communist Party (CCP) booth when a raucous woman, approximately 50 years old, began yelling at a pair of men, one a Westerner and the other Chinese, who were having a private conversation. The woman yelled: “You’re not Chinese!” “You’re a bad person!” “You’ve sold your country!”

The angry woman was referring to the fact that the middle-aged Chinese man was talking to a volunteer at a Quit the CCP booth. She continued to disparage him while gesturing to her rear.

A crowd of more than 50 people formed over the next few minutes as onlookers on the sidewalk slowed, merchants and customers stepped out of stores, and people walked towards them from across the street.

The woman then allegedly attempted to incite the crowd to beat the Chinese man, saying, “Pull him out!” “Beat him!” “He’s not Chinese!”

According to the Chinese man, William, who doesn’t want his picture or last name disclosed for safety reasons, “I started talking to a guy handing out newspapers, and a woman began screaming at me. She then tried to incite about 10 people to beat me.”

William told her, “I’m Chinese-American and I have a right to speak my mind.”

She ignored him and then twisted his words, “He said he isn’t Chinese!”

Kay Harmon, a Falun Gong practitioner from Orlando, Florida, flew to Flushing for the weekend to volunteer at one of five booths in the City set up to help Chinese withdraw from the CCP. As he was passing out Chinese Epoch Times and manning the booth, William stopped to talk to him.

William explained to Harmon how he has gradually learned the facts about Falun Gong and the Chinese Communist Party’s persecution of the practice. He added that he’s been a Flushing resident for over 20 years and has never encountered such verbal and physical abuse from pro-Communist groups. Then the woman interrupted them.

This was the second time William has received threats while trying to rationalize with pro-CCP groups in New York.

During a Falun Gong parade in New York’s Chinatown in late May, William first faced a group of CCP supporters. He told them that they can’t use violence against Falun Gong. “Then almost 20 Chinese faced me and yelled ‘Kill him!’”

“I’m so scared,” William told the Epoch Times. “For the last 20 years there has been no violence in my neighborhood. But for the last two months, I’ve received two death threats from pro-CCP groups for speaking out in support of Falun Gong’s right to be heard.”

William also expressed confusion about various local government officials’ lack of sympathy and support for those Falun Gong practitioners who have been assaulted in the past few months.

“Why is our city council member [John Liu] and assembly [Assemblywoman Young] supportive of those who’ve committed violent acts towards Falun Gong? Why didn’t our government speak out when Judy Chen, whose two sons are in the military, was beaten? When the mother of soldiers is attacked in Flushing, you should say something.”

William was referring to Judy Chen, a Falun Gong practitioner who was beaten by CCP supporters while volunteering at a Quit the CCP booth last May.

Since May 17, mobs have threatened and sometimes violently attacked Falun Gong practitioners in Flushing. The Chinese Consulate of New York and local communist-friendly media played on the patriotic sentiment in the Chinese community after the large earthquake in Sichuan, China—inciting anger against Falun Gong practitioners with false claims that they were disrupting earthquake relief efforts.