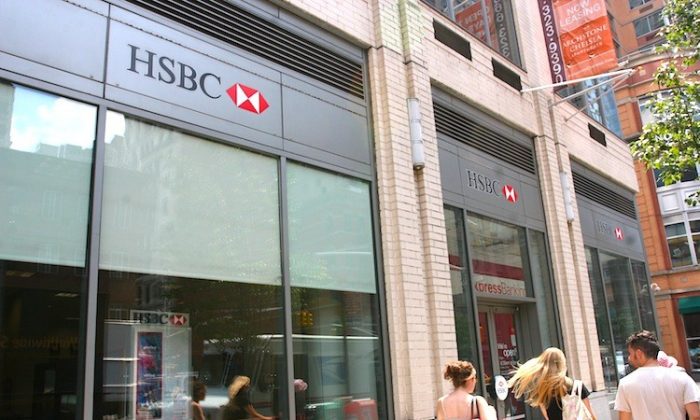 HSBC is in the process of retreating from the American retail banking market. Meanwhile, customers in New York have already been notified to clean out their safe-deposit boxes.

HSBC Holdings is a British multinational investment bank and financial services holding company. It’s the largest bank in Europe and headquartered in London.

According to a May 27 Reuters report, HSBC will sell or close about 150 commercial bank branches in the United States, exit most of its retail banking operations catered to individuals and small businesses, and maintain only a small physical presence in the United States to serve a small number of wealthy clients.

The report also said that HSBC’s U.S. wealth and personal banking business incurred a loss of $547 million in 2020 compared to a $5 billion profit in Asia, primarily from Hong Kong—its most profitable market.

The deal is expected to close in the first quarter of 2022. HSBC will retain more than 20 branches and turn them into “wealth management centers” that will continue to serve high-net-worth international clients.

HSBC customers in New York recently received notices, stating that the bank will be renamed Citizens Bank and safe-deposit box customers need to remove their belongings from their safes.

Mr. Huang, a resident of Elmhurst in Queens, New York, told The Epoch Times that he received letters from HSBC in late August and early September, informing him that the safe-deposit box operations at the Elmhurst East Branch will end on Sept. 27, his bank safe-deposit box contract will be terminated, and he needs to retrieve his belongings before Nov. 5. If no actions were taken by that time, the safe would be drilled open in the presence of a notary and HSBC staff, and the contents would be removed and stored on his behalf for two years.

The HSBC branches at 58 Bowery Street in Chinatown and 39-10 Main Street in Flushing will be converted into HSBC Wealth Management Centers, serving premium customers only, while day-to-day deposits and withdrawals will move to other branches that will be renamed Citizens Bank.

HSBC traces its origin to British Hong Kong, and its present form was established in London by the Hongkong and Shanghai Banking Corporation in 1991; its name derives from that company’s initials. The Hongkong and Shanghai Banking Corporation opened branches in Shanghai in 1865. Though HSBC moved its headquarters to London in 1993, Hong Kong remains its largest market, accounting for 54 percent of its profits worldwide.

HSBC showed support for Beijing’s controversial national security law, which was implemented in Hong Kong in June 2020. The chief executive for HSBC’s Asia-Pacific division, Peter Wong, signed a petition supporting the law and stated in a post on Chinese social media that HSBC “respects and supports all laws that stabilize Hong Kong’s social order.”

In response, Joshua Wong, a Hong Kong pro-democracy activist, decried the bank’s position and said that it demonstrates “how China will use the national security law as new leverage for more political influence over the foreign business community in this global city.”

Alistair Carmichael, the UK chairman of the All-Party Parliamentary Group on Hong Kong, said HSBC made a serious error by bending to China’s will regarding the security law, calling it “a colossal misjudgment” since it would be seen as a large British corporation advocating for “a fairly flagrant breach of international law” when banks rely on a rules-based system.

At the time, Kyle Bass, a billionaire hedge fund investor, harshly criticized HSBC’s obedience to the Chinese Communist Party (CCP) on Twitter, and called for sweeping U.S. sanctions against the bank.

Former U.S. Secretary of State Mike Pompeo also singled out HSBC for not closing the bank accounts of 11 Chinese and Hong Kong officials who were sanctioned by the United States for undermining Hong Kong’s autonomy.

In January, the CEO of HSBC defended the company’s relationship with Chinese authorities in Hong Kong and the freezing of Ted Hui’s account to the United Kingdom’s parliamentary foreign affairs committee.

In February, over 50 members of the Inter-Parliamentary Alliance on China called for the immediate unfreezing of funds belonging to Ted Hui and his family.

According to a government document obtained by The Epoch Times in December 2020, since 2016, the CCP has been able to go directly to the Hong Kong HSBC and investigate the accounts and records of certain Chinese officials implicated in corruption probes.

Cooperation with the CCP

In mainland China, HSBC’s fostering of ties with CCP did not immediately pay off. State media accused the bank of playing a role in the arrest of Huawei’s chief financial officer Meng Wanzhou. In December 2018, Canadian authorities arrested Meng at Vancouver International Airport on a U.S. extradition warrant. She is accused of being involved in a scheme to use the global banking system to evade U.S. sanctions against Iran.

Since then, a number of Hong Kong media reports have shown photos of HSBC branches embarking on an “image transformation.” Its employees wear bright red polo shirts, commonly known as “China Red.”

As part of its latest push into Asia, HSBC is pouring billions of dollars into wealth services in China, where it has hired 600 wealth managers to cater to the needs of the nouveau riche. Noel Quinn, the CEO of HSBC Holdings, told Bloomberg on Sept. 2 that it’s “an opportunity too big to miss” for HSBC, even though Xi Jinping is cracking down on the rich.

HSBC is still Europe’s biggest bank, according to the Bloomberg report, but with almost two-thirds of pre-tax profits from Asia in the first half of this year, it’s clear where its priorities lie. HSBC is in the process of relocating several senior executives from London to Asia, although Quinn stressed that the bank would not yet move its headquarters from the British capital.