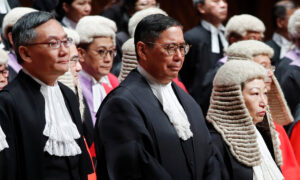 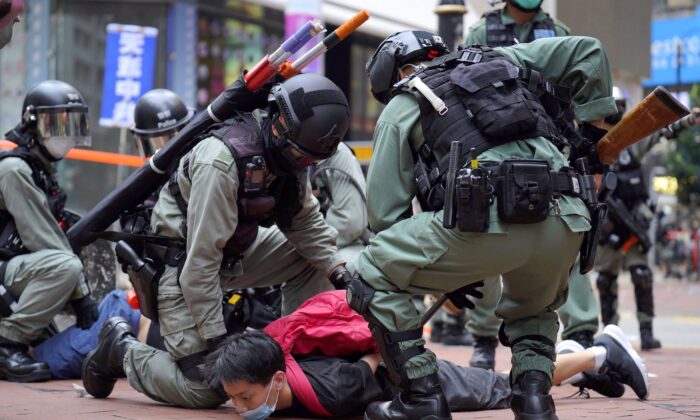 Riot police detain a protester during a demonstration against Beijing's national security legislation in Causeway Bay in Hong Kong on May 24, 2020. (AP Photo/Vincent Yu, File)
Canada

The Chinese regime’s approval of highly controversial security legislation in Hong Kong that triggered an outcry around the world and mass protests in the territory is being supported by pro-Beijing groups in Canada.

The new law, which makes it a crime to undermine Beijing’s authority in the territory, mainly targets four areas: subversion of state power, division of the country, terrorist activities, and interference by external forces.

The law, enacted by bypassing the local legislative process, means the end of the “one country, two systems” principle in Hong Kong that has been in place since Britain returned control of the territory to China in 1997, and which was supposed to remain unchanged for 50 years.

Groups Side With Beijing

As democracy supporters in Hong Kong continue to fight against the law, and international communities take various actions to support the Hong Kong people and protect democracy in the territory, some pro-Beijing groups in Canada have rushed to side with the Chinese regime.

A full-page statement published in Chinese-language newspaper Ming Pao on May 25 by the National Congress of Chinese Canadians (NCOCC) says the new law is the cornerstone for Hong Kong to become the world’s premier financial and commercial centre. It says the law not only provides protections for individuals and institutions, but also creates a fair competitive platform for the business community.

The statement uses the term “we overseas Chinese” to imply broad support for the new law.

The news outlet Ming Pao also published a report on its website about the statement which quotes NCOCC chair Cai Hongan. He said there was a “silent majority” who took to the streets to express support for the law, and mainstream public opinion supports the law so it should receive sufficient respect and a favourable response from the Canadian government.

The NCOCC’s statement has been reprinted on Chinese news websites in Canada such as westca.com and vansky.com.

According to westca.com, the NCOCC has branches in Victoria, Vancouver, Edmonton, Calgary, Winnipeg, Toronto, Montreal, and Halifax.

Chen Yonglin, a former Chinese diplomat who defected to Australia in 2005, has said the NCOCC is at the top of a pyramid of organizations established in Canada by the Chinese Embassy and consulates. Its purpose is to control and influence the Chinese-Canadian community as well as the government, he said. The NCOCC has denied Chen’s claim.

Before the passage of the Hong Kong security law on May 28, Sing Tao Daily published a full-page commentary in Toronto and New York in support of Beijing’s plan to implement the legislation. It was written by the paper’s chairman Ho Tsu Kwok, who is close with the Chinese regime.

Since the Hong Kong anti-extradition mass protests that began in March 2019 and lasted for almost 10 months, Beijing has been making full use of its propaganda machine at home and abroad to justify its suppression of the protesters and, most recently, the implementation of the new security law.

Last August, a group of pro-Beijing organizations including the Confederation of Toronto Chinese Canadian Organizations held a rally in the Toronto area against the protests in Hong Kong over the proposed extradition law.

Gloria Fung, president of Canada-Hong Kong Link, says the leaders of many of these groups have been very vocal in reiterating the official lines of the Chinese regime.

In October 2019, the leaders of those groups took part in celebrations of the 70th anniversary of the founding of the People’s Republic of China in different cities in Canada as well as in Beijing.

‘How Dare They Represent Us?’

In the comment section of the NCOCC’s statement reprinted on westca.com, there are a total of 168 comments, although only 14 are visible. However, all the comments are negative.

One reader commented, “These people are really shameless. How dare they represent us? They are digging holes for us Chinese.”

Another said, “I know these people. … They set up their own so-called associations, then grant themselves a title, go to events organized by the Chinese Consulate General to eat or drink, trying to find the feeling of becoming so-called community leaders. … Don’t represent me, a never-heard-of organization. I oppose Hong Kong National Security Law. Where is the promise that Hong Kong will remain unchanged for 50 years? Why should Hong Kong be pulled backwards?”

There are also numerous negative comments on the NCOCC’s statement across various social media platforms. On Chinese Heritage’s Facebook page, Peter Chan wrote, “Can we launch an action against the Association? I never gave them my authorization to represent me both legally and illegally! Did you? Should we start the legal process?”

The Chinese-language website New Highland Vision published an article last year about the United Front, a Chinese Communist Party (CCP) organization tasked with spreading Beijing’s influence abroad. The article summarized how the CCP uses money in its influence operations overseas. “Buying off Western politicians and business people” is the number one strategy the CCP uses, it said.

In November 2018, the Hoover Institution released a report examining CCP influence activities in the United States and other countries. Regarding Canada, the report states: “As early as 1997, a leaked report by Canada’s RCMP-SIS identified improper influence through community associations connected to Chinese intelligence agencies and efforts to award politically connected Canadians in high-level roles with Chinese entities.”

It also states that “overseas Chinese have played an important role in modern Chinese politics as well as in China’s relations with the outside world. … The Chinese Communist Party seeks to encourage, even entice, ethnic-Chinese communities and individuals overseas to more fully support its interests.”