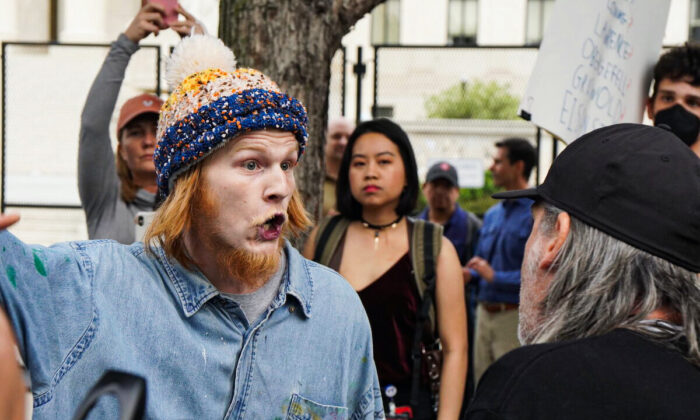 WASHINGTON-Pro-abortion protesters outnumbered a lone pro-life protester near the Supreme Court by hundreds at one point on May 5 and briefly surrounded and screamed at the man.

By 5 p.m., the daily protest over a leaked Supreme Court opinion that could potentially undo Roe v. Wade had grown to about 200 people. Most present were young women, including some high schoolers.

One issue that got the most celebration from the crowd was vasectomies. One speaker said that men should get vasectomies. The crowd cheered wildly.

“When did you get your vasectomy?” Florida activist Kimberly Cox repeatedly asked pro-life protester Mark Lee Dickson. Cox attempted to follow Dickson and nag him by asking the same question dozens of times in a row.

“If I had a baby right now, I would die. And where would that leave my children?” she said.

The protest was primarily about the potential Supreme Court decision, but it often expanded to other issues that had little to do with Roe v. Wade. Speakers brought up transgenderism, the Equal Rights Amendment, and other issues.

The protest on Thursday was more organized than previous days, with printed signs reading “Gen-Z for Reproductive Rights” held by many of the protesters.

Protest leaders struggled to prevent angry outbursts and to keep protesters concentrated on chanting together and listening to speakers.

A few yards away from the main protest, pro-life protestor Joe Green sat on a bike. He was debating with some pro-abortion protesters.

“I started speaking up near the end regarding the eugenics and Margaret Sanger’s racism,” he said.

When the main group of protesters noticed that he was pro-life, a large wave of them went toward him with a shout.

Protest leaders attempted to pull them back.

Some followed, but a sizeable core remained.

As he attempted to debate, many of them screamed at him repeatedly and called him names.

“Why don’t you go the [expletive] away?” one screamed.

One protester argued that it’s better to abort kids than to have them grow up to live out destructive generational patterns.

“If you’re saying that you witnessed deficiencies in your raising, then as a parent you do better,” Green said.

“You get the [expletive] out of here,” shouted Joseph Price, his face contorted with fury.

“No,” Price responded. “We love our rights!”

“We’re not just representing pro-choice, but our rights and the protection of our rights,” Price said, moments after he had stopped screaming at Green.

“I’m just like, trying to protect my own rights and the rights of, like, my friends,“ said Cameron Belair, another of the shouters.

As she talked, she gestured jerkily with her hands, pounding her fist against her palm.

“I had a pregnancy scare when I was 16 in high school, and I considered throwing myself down the stairs because I didn’t have the resources to abort,” Belair said.

Eventually, the crowd around Green left him alone.

Green added that he grew up in Washington and opposes abortion because he has seen the devastating impact of abortion on the city’s African American community.

“These people are rooting to make it easier to kill off those kids that were my friends,” he said.